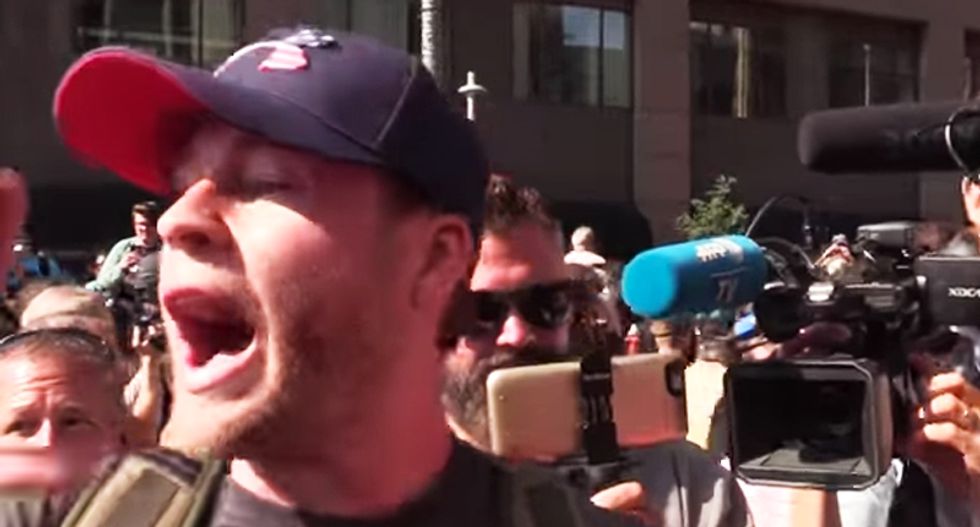 While things have pretty much settled down inside Cleveland's Quicken Loans Arena where the Republican National Convention is being held, outside is a carnival as competing groups shout over each other to grab the attention of the milling crowds.

Wednesday afternoon, videographers from the the Young Turks encountered conservative podcaster Owen Shroyer toting a loudspeaker and railing about Black Lives Matter activists who, he claims, should be more afraid of Muslims than cops.

Bellowing at the crowd, Shroyer blamed President Obama for racial tensions becoming worse, saying, "Is that because you or I are racist? No. It's because the system and the establishment, if they are here protesting, wants to racially divide us. These people don't even realize that they are part of the system that they are trying to fight."

Saying "here they come," Shroyer confronted a group of protestors, yelling at them at close range using his sound system and asking the leader of the opposing group if he knew who George Soros is.

Asked "What do you lose if there are less police killings,"Shroyer dismissed the protester's concerns.

"I don't think that's a major issue," he replied. “There are much bigger issues in this world, in this country than police brutality. I understand there’s issues with the police. I have protested against the militarization of the police before, but this is a false prophet of a protest.”

Shroyer went on to note that several BLM promoters were seen having box lunches and suggested that the billionaire Soros likely paid for them, while also complaining about abortion rates in the black community.

Watch the video below uploaded to YouTube by The Young Turks:

On Friday, People Magazine reported that Amy Duggar, the cousin of infamous former reality TV star turned convicted sex predator Josh Duggar, is publicly slamming her family for their efforts to secure leniency for him.

"This week, Josh's wife, Anna Duggar, and mother, Michelle Duggar, penned letters to a judge in support of the former 19 Kids and Counting star, 34," reported Dory Jackson. "Both letters requested Josh be returned home to his family 'in a timely manner' and urged the judge to consider his 'tender heart' and 'kindness to others' when determining his sentence."