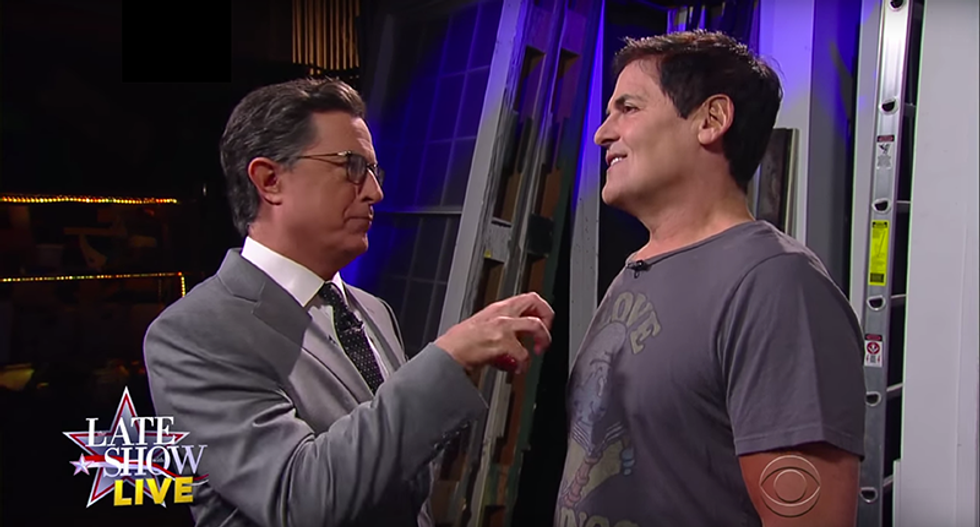 After night two's snoozefest at the Republican National Convention, Stephen Colbert was hoping things might get a little more interesting.

"We started out today, counting down to when Donald Trump will finally speak for the fourth time," Colbert joked about Trump's "Me Show." But the real insanity began with music being piped out of Donald Trump's helicopter as he landed. Except, the music was from the Harrison Ford movie "Air Force One," where Ford's presidential plane gets hijacked. "I assume, because, like Harrison Ford, Donald Trump is a famous person pretending to be the president."

So, Trump got on his plane in New York City, flew to Cleveland, then jumped on his helicopter to fly to another part of Cleveland. Why waste so much fuel? Sen. Ted Cruz (R-TX) was speaking outside and it seemed like an excellent time to troll him with a flyby of the jet. Trump flew right behind Cruz's rally, which begs the question, "Why is Ted Cruz still holding rallies?" Colbert asked.

But Cruz got the last word when he refused to endorse Trump and those on the floor had a meltdown. "Chaos!" Colbert exclaimed. "You can barely hear Cruz talking," he said before comparing it to a clip from "Game of Thrones."

"I can't impress upon you how crazy this is. He was the prime time speaker and he did not endorse the candidate," Colbert explained. "That's like being the best man at a wedding and toasting the groom by saying, 'Hey, buddy, you'll find a good one eventually.'"

After Cruz, "Eric Trump gave a speech in front of America's bright future," Colbert said, highlighting the screen problems that seemed to be happening all night at the RNC. He promised to make America great again, ahead of schedule. "Yes, ahead of schedule, Donald Trump will end America sooner than we thought."

The best part of the night, however, came when Texas billionaire Mark Cuban took the gloves off when talking about Trump. Cuban has notoriously slammed the GOP's nominee, claiming he's not as wealthy as he claims and he's not all that good a businessman.

"When you're going through customs and they ask if you've got anything to declare, try not to blurt out 'bankruptcy,'" Cuban slammed.

“Donald, do you know that to be a billionaire, you have to have the billion part in your bank account,” Cuban continued. “Not just the air.”

”Your companies fail so often, you must’ve gone to business school at Trump University,” Cuban burned.

“Oh, Donald ― he just dropped you like one of your first two wives,” Colbert chimed in.

The best, however, was when Cuban said that the only way Trump was worth billions "is if I paid you $9.5 million to wash my balls!"