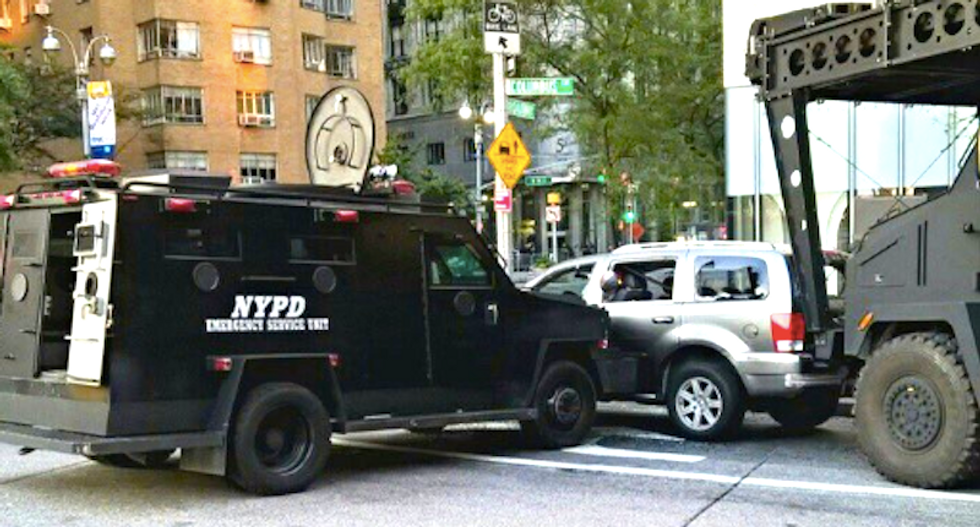 Police in New York City were locked in a standoff with a man who they believe tossed a hoax bomb into a vehicle driven by two officers.

The officers said the man tossed an electronic device into the NYPD vehicle Wednesday night and drove away in a Chrysler Aspen, which they spotted hours later near Columbus Circle.

The man, who was wearing a red helmet and sunglasses, remained for nearly six hours inside his vehicle Thursday morning but was not believed to be a threat to the public.

The suspect identified by police as 52-year-old Hector Meneses, of Queens, was apprehended at 8 a.m.

Hostage negotiators, SWAT teams, K-9 units and bomb squads responded to the standoff, which shut down the area to pedestrians and cars.

Police sent a robot to get a closer look at the man, who is believed to be alone in the SUV.

Investigators said he threw a blinking and ticking device onto the dashboard of a police van parked near Times Square, and the officers drove away from the crowded area, placed the suspicious item on a sidewalk, backed pedestrians away and called a bomb squad. The device turned out to be a candle and some electrical components wrapped in white cloth.

Watch this report posted online by CNN below: