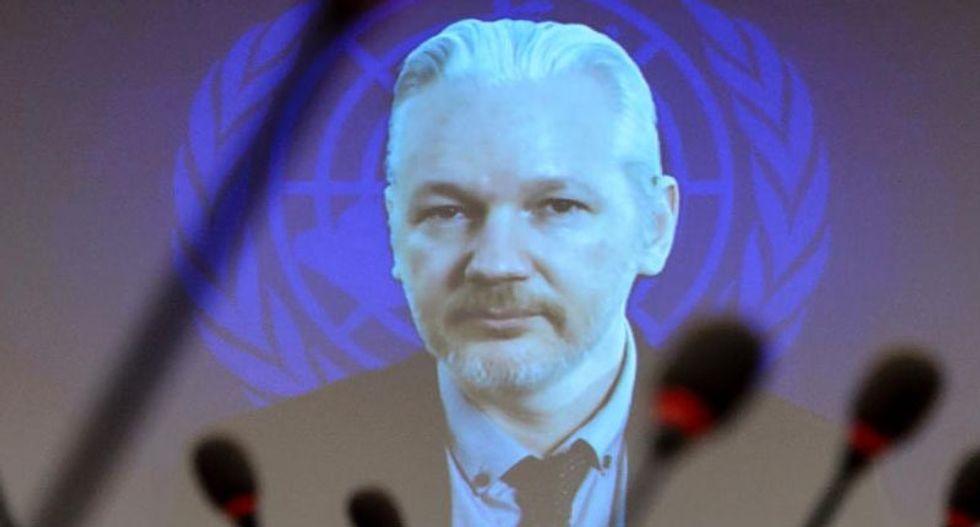 Swedish prosecutors are set to drop a sexual assault probe against Julian Assange, pictured in March speaking via web cast, when the case reaches its expiration date without investigators having succeeded in questioning the WikiLeaks founder (AFP Photo/Fabrice Coffrini)

Because this election cycle has seemingly been about reviving controversies from decades past, the online hacked document site Wikileaks is currently taking criticism for tweets concerning its latest dump, which targeted the Democratic National Committee.

According to the Daily Dot, Wikileaks responded to criticism over the DNC leak on Twitter with a post that was interpreted by some as anti-Semitic.

The "echoes" symbol, or parentheses marks surrounding a person's name on Twitter, was previously used by white supremacists and neo-Nazis to single out Jewish social media users and direct other racists to attack them. Since that knowledge became widely-known, some have put the symbols in their own user names as an act of solidarity against the discrimination.

The document dump, on the eve of the Democratic National Convention in Philadelphia where Hillary Clinton is set to accept the party's nomination, has angered supporters of Clinton's rival in the primaries, Bernie Sanders. On Sunday, Clinton's campaign manager, Robby Mook, suggested the leak was carried out by Russian hackers with the intention of helping her Republican rival, Donald Trump.

The leak, and suspicion that Russian hackers with Kremlin ties were behind it, caused some to question this week whether Trump has uncomfortably close ties with Russian president Vladimir Putin. Trump has also found a following that includes white supremacist David Duke -- and Trump himself has been known to retweet Twitter posts from white supremacist sites.

Intentionally or not, Wikileaks has entered the fray. Although the man behind Wikileaks, Julian Assange, attempted to explain the message, some thought it was anti-Semitic.

"It’s not exactly the most coherent tweet, but the thrust is nonetheless pretty clear: Wikileaks accused most of its critics of having the (((echoes))) brackets around their names, as well as 'black-rimmed glasses,' statements that many interpreted, plainly enough, as 'most of our critics are Jews,'" writes the Daily Dot's Chris Tognotti.

The Daily Dot also took Assange to task for tweeting a menacingly at MSNBC's Joy Reid that "Our lawyers will monitor your program" when she announced her show would explore the "unprecedented affinity between an American presidential candidate - Trump - Russia and [Wikileaks]."

JTA reported that by early afternoon Sunday, Wikileaks had deleted the tweets. Also as of Sunday, DNC chair Debbie Wasserman-Schultz has resigned.