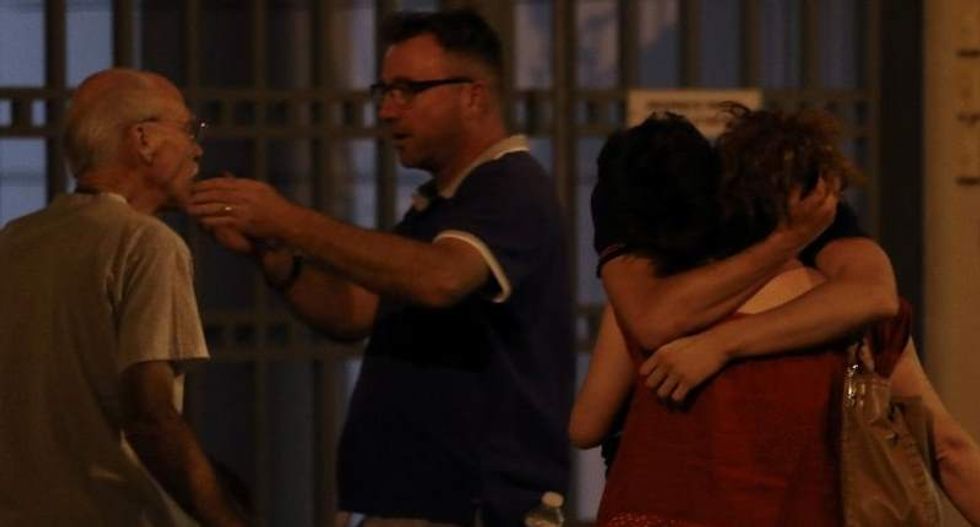 People react in the French Riviera town of Nice on July 15, 2016, after a van drove into a crowd watching a fireworks display. (Agence France-Presse/Valery Hache)

An AFP reporter had to shield his face from the flying debris as he watched a truck plough at full-speed into a crowd celebrating Bastille Day in Nice on Thursday night, leaving at least 60 people dead.

"It was absolute chaos," said the AFP correspondent, who was among the crowd gathered to watch the fireworks for France's national day on the beachfront Promenade des Anglais.

"We saw people hit and bits of debris flying around," he said.

"I had to protect my face from flying debris."

The correspondent described the moment that the large white truck plunged into crowds of people who had come to the bustling Mediterranean beachfront to celebrate.

Terrified people screamed and scattered as it veered down the promenade, where adults and children were walking towards the famous Negresco Hotel.

Nice prosecutor Jean-Michel Pretre said the truck drove two kilometres (1.3 miles) through the crowd, mowing people down in what one local official has called a "major criminal attack".

"For a big truck like that to get actually onto the promenade and then to go in a fairly straight line along there, looked to me like a very deliberate act," the reporter said.

"It was about 100 metres from me and I had a few seconds to get out of the way."

Other witnesses described hearing gunfire, although this was not immediately confirmed by the authorities.

Police could be seen surrounding the truck in the early hours of Friday, its windscreen riddled with bullet holes, under the lights of the Negresco Hotel.

Australian Emily Watkins said she was less than 50 metres away from the incident and saw the truck on the promenade but did not realise what was happening.

"There was a lot of confusion. I don't actually remember seeing the truck moving," she told the Australian Broadcasting Corporation.

"There was a lot of screams coming from ahead of us where the truck was, and people just running towards us and without really knowing what was going on we turned and ran as well.

"As we were running away we could hear what I thought at the time were more flares or fireworks.

"People were tripping over and trying to get into hotel lobbies and restaurants or car parks or anywhere they could to get away from the street."

Earlier in the evening, as the crowds enjoyed the fireworks, lightning had flashed in the skies above the Riviera resort.