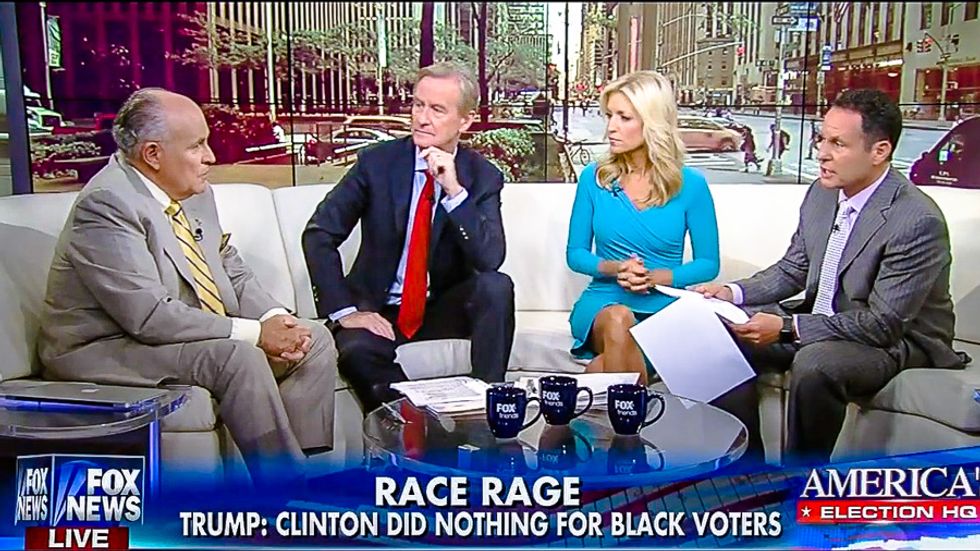 A panel of white hosts and pundits on Fox News asserted that Donald Trump's Tuesday speech to a nearly all-white audience in Wisconsin showed that the Republican presidential nominee did not "take the black vote for granted" like they said Democrats had done for years.

On Tuesday, Trump traveled to West Bend, Wisconsin -- which is 95 percent white -- to ask "for the vote for every African-American citizen struggling in our society today who wants a different and much better future."

"Consider how dangerous that was," Giuliani opined. "Going into Milwaukee in the middle of the riots and talking about law and order. But also talking about what needs to be done to help minority communities, African-American communities, poor communities to come out of the situation that they're in. No one has offered answers like that together."

"This is the first time I can remember him talking about minorities except on the defensive," Kilmeade agreed. "Here he is on the offensive, saying, 'I am not ignoring you.'"

"When he looked and said, 'I know there's a problem in the community, I'm not ignoring you, I want your vote,' Republicans don't even go for the black vote and Democrats take it for granted!" the Fox News host added. "Therefore, the African-Americans and minorities are the losers in this situation. He addressed that last night!"

"He addressed it directly," Giuliani replied. "And he addressed the big problem we've had for maybe 30, 40 years and why we can't crack through. The Democratic Party, including Hillary Clinton, takes the black vote for granted."