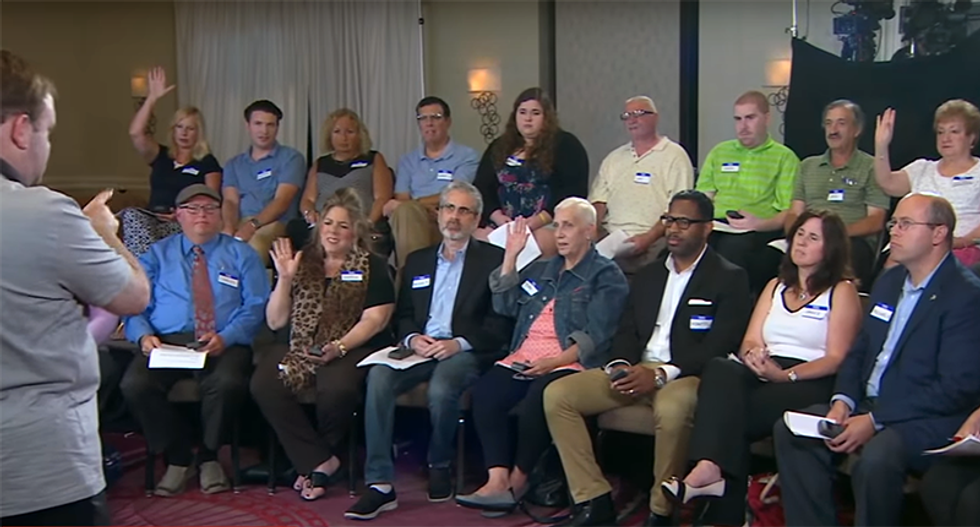 Pollster Frank Luntz is the GOP darling when it comes to his focus groups for conservatives, but not even Luntz can polish the steaming pile Trump has handed him.

“He was my first choice. But just along the way, he has — I guess you can say he’s lost me,” one focus grouper told Luntz in a video that aired on CBS's "Face the Nation" Sunday. “I’m not saying there’s no chance of turning but he’s become outrageous. I mean, we all have thoughts, but I think he speaks without thinking.”

The collection of respondents come from Pennsylvania voters where recent polling numbers show a lead for Clinton in the swing state.

“When he initially began to run, he gave voice to a lot of the frustrations that I was feeling about how government is working or more to the point not working,” focus group member Michael said. “But since then, he’s been running as a 12-year-old and changes his positions every news cycle, so you don’t even know where he stands on the issues.”

Michael was one of several people who indicated that they have changed their support for Trump over the last year since the campaign has dragged on. Only a handful of Trump supporters remained.

“Whenever somebody makes a derogatory comment to him, like in a democratic convention, Trump feels like he needs to attack that person," said another panelist named Howard. "And he says things that are crazy. And I keep asking myself: is this the kind of person I want to handle the nuclear codes?"

Luntz followed up asking what his opinion was on that question. Howard answered simply: "No way."

“I almost think the last couple of weeks, he might be second-guessing this, because he even said like a week ago, ‘it’s okay if I’m not the president,’” one woman said, wondering if Trump was really still running for president. “And then he’s just throwing out all of these bizarre comments. So I’m wondering: Is he serious still about it?”

“The more he made it about his personality, the less likely that I am to vote for him and it seems like everyone else is going in the same direction here,” said Bill, who also indicated a preference for a greater focus on policy. “The last couple of weeks, I’ve seen kind of a pivot back to the issues, and that gives me a little bit more hope for him. But he’s yo-yo’d back and forth so many times I need to see a little bit more.”

He wasn't the only one who wanted to see a greater focus on policy. “He’s got to at least give us a plan of what he -- some kind of plan of action of what he would like to do,” said Sharon. “I want him to talk more about that and stop attacking people and attacking erratic.”

“I think we’re looking for leadership that inspires all of us to be greater than ourselves," Mark interjected. "So I’m looking for the things that he says that are scripted, even the teleprompter that he makes fun of but now he uses. But also the unscripted things like the debates, and let’s see how he reacts under pressure when he has to — one on one with Hillary.”

One panelist remarked that the general election is a lot like a job interview for president and an applicant would never say or do some of the things Trump has done if they were applying for a real job.