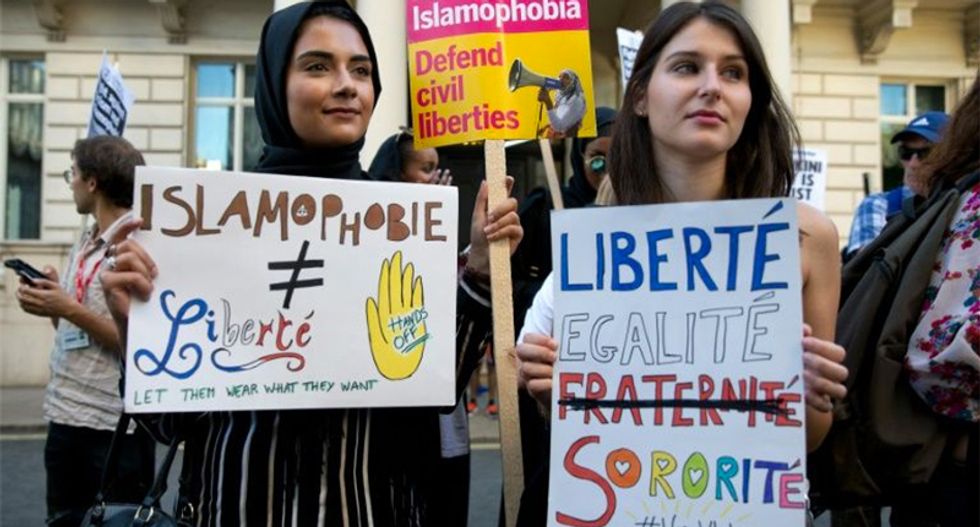 Women join a demonstration outside the French Embassy in London on August 26, 2016 (APF)

It would be "unconstitutional" for France to pass a law banning the burkini, and such a move could cause irreparable harm, French Interior Minister Bernard Cazeneuve warned in an interview published online late Sunday.

Speaking to French daily La Croix, Cazeneuve reiterated the government's opposition to legislating on the controversial matter which has sparked fierce debate both at home and abroad about women's rights and France's strictly-guarded secularism.

Around 30 coastal resorts have recently banned women from wearing the full-body swimwear on their beaches, although France's highest administrative court on Friday overturned the measure in one town, in a ruling likely to set a legal precedent which will also affect the others.

Rightwing figures are pushing for a nationwide ban to be written into law, led by former president Nicolas Sarkozy who this week launched his bid to regain the presidency in next year's election.

But Cazeneuve ruled out any such move.

"As the prime minister has said, the government refuses to legislate on the matter because any such law would be unconstitutional, ineffective and likely to create antagonism and irreparable tension", he said.

"However, Muslims must continue to engage with us over gender equality, the inviolate nature of the principles of the French Republic, and tolerance in order to live together in peace," he said, noting that in overruling the ban, the court had "stated the law".

He also lashed out the opposition for trying to earn political points from the controversy at a time when the country has been rattled by a string of deadly attacks claimed by Islamic State militants.

"Certain opposition leaders are making a lot of noise. They think that in the current context of terror threats, we can abandon the fundamental principles of law as embodied in the Constitution," he said, warning that such a move would be "a serious mistake".