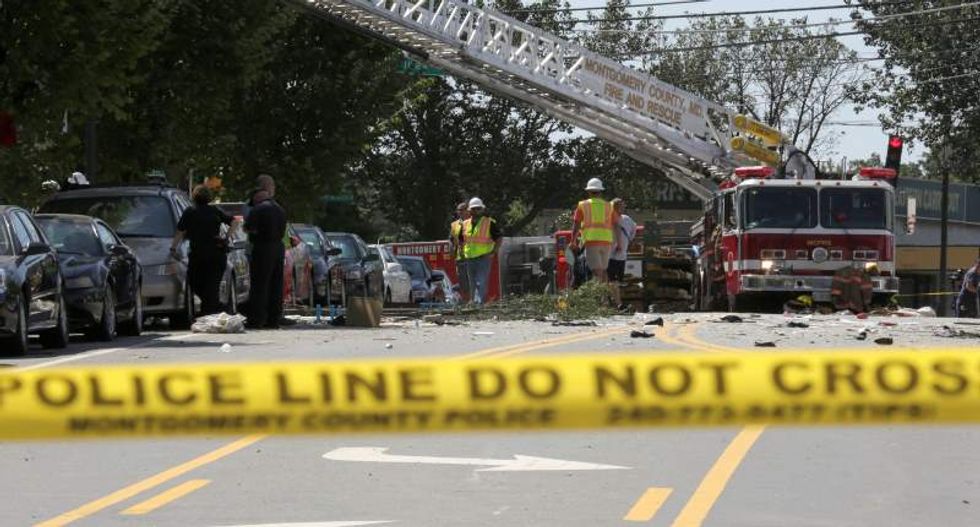 Fire fighters look through the debris of a four-story building that was destroyed in an explosion that has left up to seven people missing in Silver Spring, Maryland, on Aug. 11, 2016. (Reuters/Joshua Roberts)

Two people were killed and several remained missing after an explosion and fire tore through an apartment complex overnight in a Washington suburb, authorities said on Thursday.

The blast and fire just before midnight at the four-story complex in Silver Spring, Maryland, injured 34 people, including three firefighters. All the firefighters were treated and released.

Residents reported smelling gas just before the blast, Montgomery County Executive Ike Leggett said at a news conference. The explosion was felt more than a mile away (1.6 km) and tossed debris as far as 300 feet (90 meters), fire officials said.

While the exact number of missing people was not known, the Montgomery County Fire and Rescue Service said in a message that crews continued to search for five to seven occupants that remained unaccounted for.

Two bodies were recovered in the building rubble, but the victims were not identified by police.

The cause of the blast was still being investigated.

Washington Gas, a unit of WGL Holdings Inc, which provided service to the complex, said in a statement it was helping in the investigation.

About 160 firefighters battled the blaze, which was brought under control after about two hours. Television footage showed flames and smoke pouring from the building as firefighters rescued a man from an upstairs apartment window.

Agents from the Bureau of Alcohol, Tobacco, Firearms and Explosives (ATF) were helping local fire investigators. ATF experts are routinely sent to help in investigations of major fires, an agency spokesman said.

Clothing was seen strewn on sidewalk treetops in video footage provided by fire officials. Bricks were launched across a roadway, badly damaging a storefront and cars parked nearby.