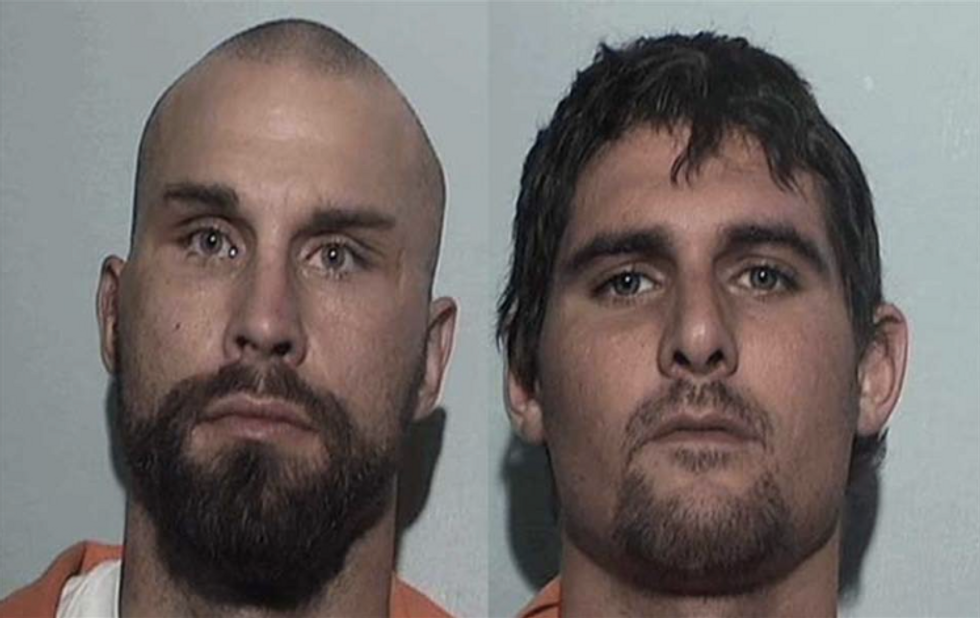 Image: Charles E. Butler, Jr., left, and Robert Paschalis. These mug shots taken after an attack on a black Toledo man in May, 2016 (Ohio Public Safety)

An Ohio man who hoped to resurrect the violent white supremacist group the Aryan Republican Army was charged with felony hate crimes by federal prosecutors. In the 1990s, the group robbed 22 banks in hopes of gaining enough funding to spark a war between black and white Americans.

In May, Butler was arrested along with Robert A. Paschalis, 25, for attacking a black man with a broom handle in a racially motivated attack. The two men are being prosecuted by federal officials under the 2009 Matthew Shepard and James Byrd, Jr. Hate Crimes Prevention Act, which makes it a federal crime to attack someone because of their race, religion, national origin, gender, sexual orientation or disability.

Butler and Paschalis were driving in Toledo in a pickup truck bearing a Confederate flag sticker. The men passed a black man identified by the Toledo Blade as Adrian Williams and instigated a confrontation, calling Williams "ni**er" and "fa**ot."

Butler grabbed a broom from the bed of the truck and proceeded to beat Williams with its wooden handle. The attack was broken up by a group of bystanders that included two off-duty Ohio Public Safety Officers.

The attackers were taken into custody, where they remain.

When asked by police about the motive for the attack, Paschalis said, "If you couldn't tell, he's [Butler] extremely racist.” Court documents call Butler a "self-identified white supremacist.”

The Blade said that Butler blamed Williams for the attack, that the black man provoked him by calling him a "cracker." Paschalis said this was not the case and admitted that he has had to get Butler out of violent altercations before.

Court documents said, "[Butler] has numerous tattoos indicative of white supremacy, including the German War Eagle, a portrait of Adolf Hitler, a Swastika and a Confederate flag.”

Evidence seized after the attack included "recruiting materials for racial and religious hatred and causing violence throughout the State of Ohio in the name of white Christians (Aryans)."

The documents went on, “There were also instructions on training procedures, paramilitary structure throughout the organization and weapons needed to carry out the mission of the Aryan Republican Army.”

In a Facebook post bragging about attacking Williams, Butler called the victim a "ni**er" and a "b*tch."

The Blade said that Butler moved to Toledo in late 2015 after serving time in an Arizona state prison for domestic violence.

“I have no idea why they say this is racially motivated, because I’ve gotten in fights with white people, Japanese, Mexican,” Butler said.

Trump's special master legal team is 'on its heels' and only has two options left: analyst

On the morning after the latest major test of Donald Trump's attempt to slow down the DOJ's investigation of the classified documents he took with him to his Mar-a-Lago resort, Politico's political analyst Josh Gerstein claimed the former president's attorneys seemed to be grasping for a defense under withering grilling under special master Raymond Dearie.

Appearing on MSNBC's "Morning Joe" early Wednesday morning, Gerstein was joined by former U.S. Attorney Chuck Rosenberg, and neither saw much that happened that would make Trump happy.

‘Onesie-twosies’: DeSantis declares Florida not seeing ‘mass’ migration in defense for going to Texas for immigrants

Criticizing "Biden" for "flying these people all over the fruited plane," Republican Governor Ron DeSantis defended his scheme to go into Texas to take asylum-seeking immigrants, round them up, and send them to Martha's Vineyard by stating there is not "mass" migration into Florida.

DeSantis, facing a tight re-election battle against Democratic former Florida Governor Charlie Crist, is under fire from the left and the right for what some legal experts say may be a kidnapping or human trafficking operation. One Texas sheriff has already announced he is opening an investigation into the DeSantis escapade, several Massachusetts attorneys are looking at suing DeSantis, and the Massachusetts U.S. Attorney is talking with DOJ about possible legal action as well.

'We are coming for you!': Teamsters Union rallies outside Amazon headquarters

More than 1,000 members of the Teamsters union and allies turned out Tuesday in downtown Seattle to stand in solidarity with Amazon workers and to denounce the tech titan's "union-busting tactics and dangerous labor practices."