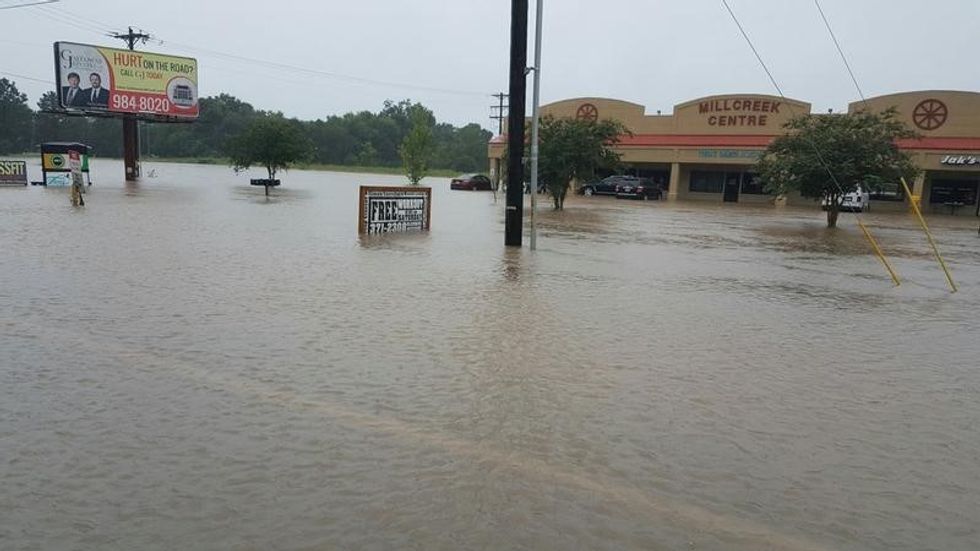 More than 20 inches (51 cm) of rain had inundated parts of Louisiana by late Saturday, with another several inches expected on Sunday in some locations, he said.

"The heavy rainfall is not going to be as widespread as it has been over the last day or two," said Tingler.

Edwards, who has declared a state of emergency in Louisiana, said on Saturday that emergency workers had to rescue more than 1,000 people from homes, cars and trees as rivers in the southern part of the state spilled over.

Maurice Butler, 52, was riding in the back of a National Guard truck on Saturday with his wife, two sons and three dogs after being rescued from flood waters in Denham Springs, west of Baton Rouge.

"I woke up about 7:30 this morning and the water was half way up my yard," he said. "I didn't think too much of it at that time, but it just took about 40 minutes and it was in my house."

Authorities confirmed a third death in Louisiana on Saturday after recovering the body of a woman from the Tickfaw River in St. Helena Parish, northeast of Baton Rouge near the Mississippi border.

Michael Martin, chief of operations for the parish sheriff's office, said the woman was riding in a car with her husband and his mother when flood waters swept the vehicle into the river. Rescuers found the two others clinging to a tree on Saturday.

A 54-year-old man in Greensburg in the northern part of the state died when his vehicle was swept off the road. The vehicle was still submerged in the flood waters and the crash was under investigation, a Louisiana State Police spokeswoman said in a statement on Saturday.

The body of a 68-year-old man was recovered on Friday near Baker, Louisiana, close to the state capital, after he drowned while trying to evacuate, said William "Beau" Clark, the coroner in East Baton Rouge Parish.

In Mississippi, water rescues were conducted throughout Friday, and two people were reported to have suffered minor injuries in Harrison County, the state's Emergency Management Agency said.

Even as the severe weather eased in the eastern part of the region, rivers further west in Louisiana were spilling over, and flooding could worsen over the next 24 to 36 hours, Edwards said.

He described the floods as more severe than those that struck the state in March, when at least four were killed and thousands of homes were damaged in Louisiana and Mississippi.

"This is unprecedented," Edwards said, advising residents to heed warnings. "Please don't rely on your experiences in the past."

In Livingston Parish, where floods had displaced "well over a thousand people," authorities imposed a curfew as rivers poured over their banks, Sheriff Jason Ard said.

Ard said authorities there had a backlog of about 150 people to rescue and were now being helped by the National Guard.

"We have reports of people in attics, people on rooftops," he said. "We haven't forgotten about you and we're coming for you."