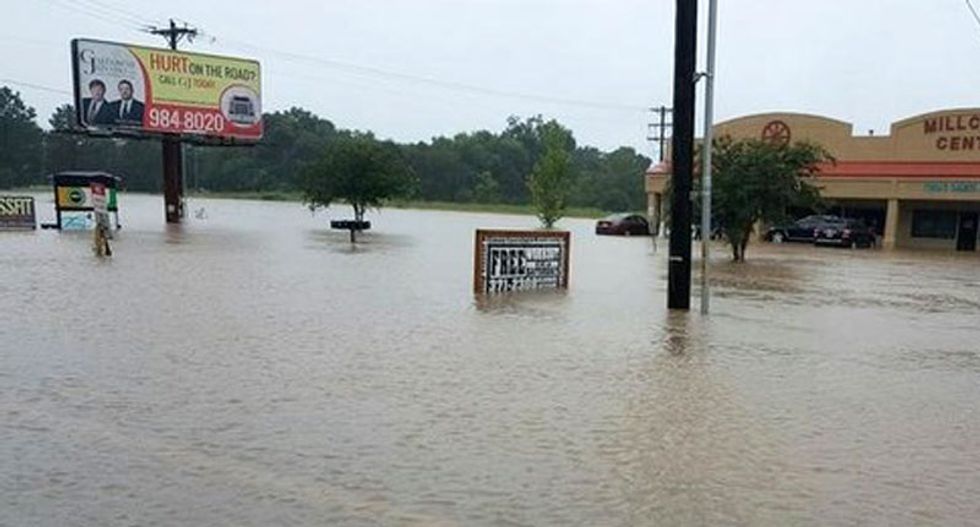 Torrential downpours in parts of Louisiana and Mississippi caused flooding on Friday that killed at least two men, left two people injured and forced residents to evacuate homes throughout the region, officials said.

Pounding rain over the past two days led Louisiana Governor John Bel Edwards to declare a state of emergency, and forced the closure of schools, government offices and many roads.

The National Weather Service issued a flash flood watch into the weekend for parts of southern Mississippi and southeastern Louisiana, including New Orleans.

The severe weather comes five months after March flooding in Louisiana and Mississippi that left at least four dead and thousands of homes damaged.

The body of a 68-year-old man was recovered near Baker, Louisiana, near the state capital of Baton Rouge, after he drowned while attempting to evacuate, said William "Beau" Clark, coroner in East Baton Rouge Parish.

In northern Louisiana, the body of an unidentified man was recovered from a pickup truck that had been swept off a highway near the town of Greensburg, the St. Helena Parish Sheriff's Office said.

In Mississippi, water rescues were conducted throughout the day and two people were reported with minor injuries in Harrison County, where roads were reopened by the afternoon, the state's Emergency Management Agency said.

The Tangipahoa, Biloxi and Pearl rivers all were flooding, he said.

In Tangipahoa Parish, near Baton Rouge, Sheriff Daniel Edwards said rivers were rising quickly, and authorities expected more evacuations to be carried out during the day.

"I'm already seeing housing taking on water. If we get much more rain, we're going to have quite a few homes flooded," said Edwards, brother of Louisiana's governor, in a phone interview.

Amtrak halted a southbound train from Chicago en route to New Orleans due to water on the tracks near Osyka, Mississippi. It plans to bus passengers from Jackson to New Orleans, the Mississippi Emergency Management Agency said in a statement.