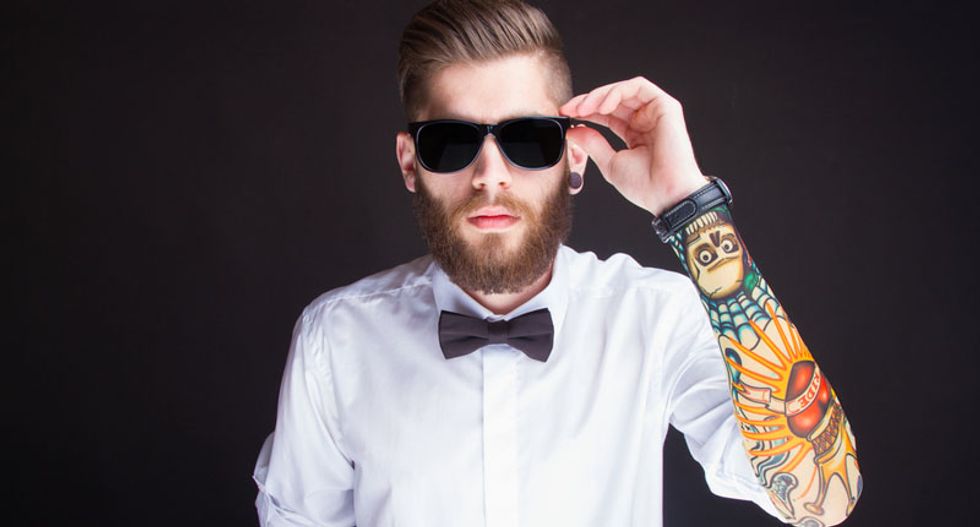 People go to farmers markets for many reasons. The festive yet wholesome atmosphere makes us feel good about our communities. We might bump into that person we’ve been meaning to call, and perhaps buy a bar of soap. A burrito, perhaps, and a fresh-squeezed lemonade. And sometimes, we even want to buy some produce. A bag of salad mix, perhaps, and hope it doesn’t wilt before we skateboard home. But produce shopping is becoming an increasingly rare act, according to a recent Washington Post article.

“For some growers, farmers markets just aren’t what they used to be,” notes the headline. Zach Lester, a Virginia grower who sells at DC’s trendy Dupont Circle market told the Post he was down $50,000 a year from a decade ago, when he did about $200,000 in sales. This decrease comes in spite of the fact that the market is more popular than ever.

He didn’t blame the competition for his woes; he blamed the hipsters for sucking the oxygen out of the market. That’s his word, not mine, and it’s a slippery one to define. To be clear, by hipster I mean people who go to farmers market and don’t buy produce. They may or may not have an epic ‘stache, or a shirt from a machine shop with a name patch that says “Joey,” and may or may not be sipping an espresso drink from a disposable cup.

They are probably deep in conversation, especially if they care more about the scene than the cilantro. They might purchase a breakfast taco, but no basil. Maaaaybe a pint of strawberries, but no rhubarb. And in their unhurried schmoozing they clog the market aisles like arterial plaque, impeding the flow of serious shoppers who are looking for some actual damn produce. When you factor in the slow-rolling strollers, sometimes two abreast, and perhaps an impromptu reunion from the previous night’s battle of the jam bands, it’s a recipe for gridlock. And that’s assuming you can even find parking.

The serious produce shoppers, according to the Post, would sooner just go to the store than deal with the crush. And the millennials, statistically, are more likely to go out to eat.

My first instinct was to call bullshit on this idea. I have nothing but empathy and respect for farmers like Lester, but I also know a lot of young farmers. The culprit, I assumed, would be the influx of new, hungry farmers stealing market share from the aging lions who built the movement. Census data from 2012 backs up this idea, as the sub-population of farmers selling directly to consumers at farmers markets is on the rise—despite a decline in the overall farmer population. I look around my farmers market and I see a lot of farmers selling vegetables. A local market can only absorb so much.

Indeed, my hometown of Missoula, Montana provides a test lab for the idea that hipsters can suffocate a farmers market. We have two, only one of which is hipster-friendly.

For years there was only the latter. The board was agonizingly strict about which items could be sold: basically, only raw plants were allowed. No hot food. No meat. No hides from your sheep. Not even pickles made from your own cucumbers. Despite these rules it was a nice market and everyone loved it, even though we all complained about how nice a smoothie would be, or a slab of local bacon or a tamale.

Being the only game in a halfway decent little town, our lame-ass little market was booming. It got so big that another one appeared nearby—same day, just down the street—to get in on the action.

The new market, on the banks of the Clark Fork River, was billed as an outlet for local meat producers who couldn’t sell at the original market. For this reason—and not because of the bustling singles scene—everyone called it the Meat Market. My kids call it the “treat market.”

From the get-go, it was obvious the Meat Market could also be called the free market. The hot food, cold smoothies and frozen meat were serenades with live music, decorated with dyed wool, and graced with the feeling that this was what the old market “wanted” to become, if only the folks in charge would have let it. At the very least, the Meat Market was everything that we, the shoppers, could have wanted. It was a diverse, festive atmosphere rooted in farm-fresh produce, but not shackled to it.

This left farmers with the decision of which market to sell at. Some jumped ship for the friendly shores of the Meat Market. Some set up stalls on both shores, while others decided to go down with the ship, rather than join the face-painting crazies down the street. The once booming old market, aka the Plant Market, was suddenly an empty backwater, as the action quickly shifted to the Meat Market. You could almost hear the cheers and laughter drifting over. The free market had spoken.

Fast-forward a few years, and the plant market, amazingly, is still around. I still go there to get certain items from vendors I’ve long patronized, and to buy my produce in relative peace. And I’m not alone. The market, which we left for dead 10 years ago, now offers a surprisingly valuable commodity: a pleasant shopping experience, where my kids can run around and I can see them when they are more than five feet away.

The Meat Market is bigger, with more vendors, and a lot more choices of produce among other stuff. And it’s more crowded. And, especially with kids in tow, more work.

“It’s more of a social event than a shopping event,” said Stephen Paferi, a grower at the Meat Market who’d jumped ship from the other one. And like many who had done the same, he was questioning his choice.

“They hate the crowds. I can’t believe how many people bitch about the crowds. The regulars show up early. The casuals go to [Whole Foods],” concurred Mike Duda, another Meat Market farmer. “They are here for the scene, for the coffee and breakfast sandwich or whatever.”

Duda’s loyal cstomers had followed him over to the Meat Market, but now he says they have to get there early to avoid the craziness.  “I walk around and check the market sometimes, because I have help now,” he said. “Sometimes you can’t move. People with strollers; four people having a conversation, which is fine, but it’s frustrating. And if you’re a customer that just wants to go get some food, you’re like, nah."

But aside from such speculation, the proof in this comparison is in the profits. Josh Slotnick runs produce stands at both markets, and told me that he does twice the business at the plant market that he does at the Meat Market. Apparently, us mellow fogies buy a lot of produce.

In the end, every grower I spoke with, at both markets, agreed with Zach Lester that the socialites who treat the market like a Grateful Dead revival tour and block the way of people who actually want produce, are bad for business.

As for young farmers entering the market, Duda feels sorry for them. As if figuring out your land and your market wasn’t enough, now they have to contend with all the people who attend farmers markets and don’t buy produce, like a plague of locusts blocking the sun.