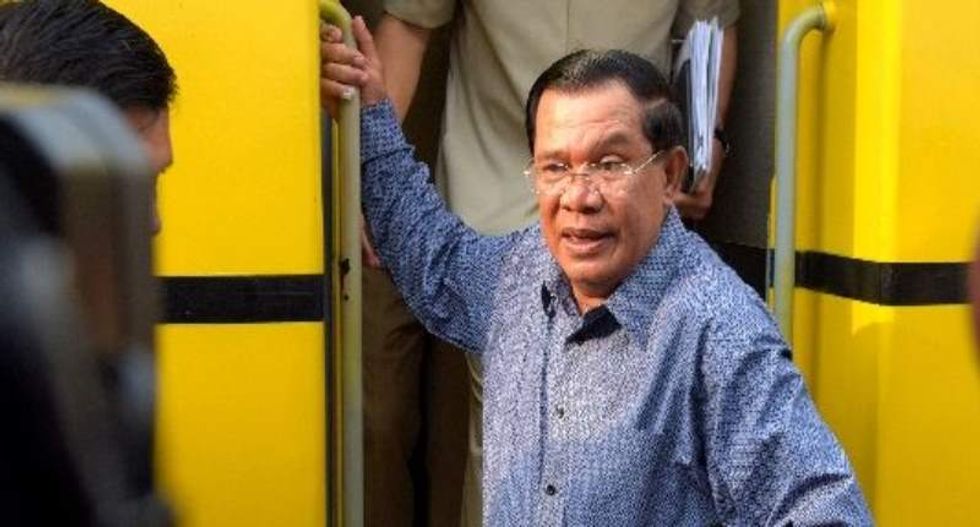 But a surge of "likes" from countries including India and the Philippines has reignited allegations that his digital adoration is purchased from so-called "click farms".

The 64-year-old prime minister, a once self-confessed tech dinosaur who tolerates little dissent, has embraced Facebook with gusto in the last year after opponents used the platform to reach out to younger voters.

He has vowed to remain prime minister until he is 74 with the next elections due in 2018.

To do so he will need the support of Cambodia's youth -- a huge, tech-savvy demographic who voted in droves for the opposition at the last polls, wearied by the endemic corruption, rights abuses and political repression seen as the hallmarks of Hun Sen's rule.

But in the last year he has embraced the digital sphere -- while ramping up prosecutions against people for online comments.

His slick page now documents everything from live broadcasts of speeches and meetings with villagers, to more personal moments like the premier kicking back in a white bathrobe or sporting a wet, see-through singlet at the beach.

But that success has been dogged by allegations that a significant chunk of fans come from "click farms" -- networks of fake and real users controlled by digital middlemen who sell likes.

In recent months, opposition groups, local media, analysts and even many of Hun Sen's own Facebook followers have all remarked on the unusual and erratic surges in likes his page receives.

- Nearly half of likes foreign -

An AFP analysis of Hun Sen's Facebook followers over the last six months using data from SocialBakers.com shows two periods when overseas likes have dramatically spiked -- the most recent in the last three weeks.

Many of the likes originate in countries notorious for hosting click farms such as India, Indonesia and the Philippines.

In contrast, 82 percent of followers for Sam Rainsy -- the country's most prominent opposition politician -- are Cambodian.

That has led Rainsy, who currently lives in self-exile in France, to accuse Hun Sen of buying friends.

"In his deceitful but childish logic, Hun Sen needs to push his popularity on Facebook in order to justify his repressive policies," he told AFP by email.

India now accounts for the largest chunk of overseas love for Hun Sen's page -- some 562,000 fans, or 11.4 percent, dwarfing even neighbouring Thailand where there is a huge diaspora of Cambodian workers.

Then from early May the rate of likes dipped slightly, only to once more rebound between July 4 and August 1 taking the number from 512,000 to 560,000.

Similar patterns have taken place this year with fans from the Philippines and Indonesia.

Philippine likes also tripled over the same period, levelling off until mid July, since when they have surged from 207,000 to 259,000.

Hun Sen has repeatedly denied allegations his fans are purchased.

"I think it is a pride for our nation that foreigners pay attention to the leader of our government through modern technology," Sok Eysan, a spokesman for the ruling Cambodian People's Party, told AFP.

"If we have money we will build roads, wells and health centres for the people, we would not spend money on buying Facebook likes," he added, saying the click farm allegations were being fuelled by "jealous" opposition politicians.

The page itself has become a matter of personal pride to Hun Sen, who frequently refers to its success and the fact he passed Rainsy in the digital popularity stakes earlier this year.

His posts portray him as an avuncular and accessible man of the people.

In one recent video that went viral, Hun Sen gave a motorbike taxi driver a ride on his own bike before handing the man $1,000.