Canada officials may charge US hunter who speared bear to death 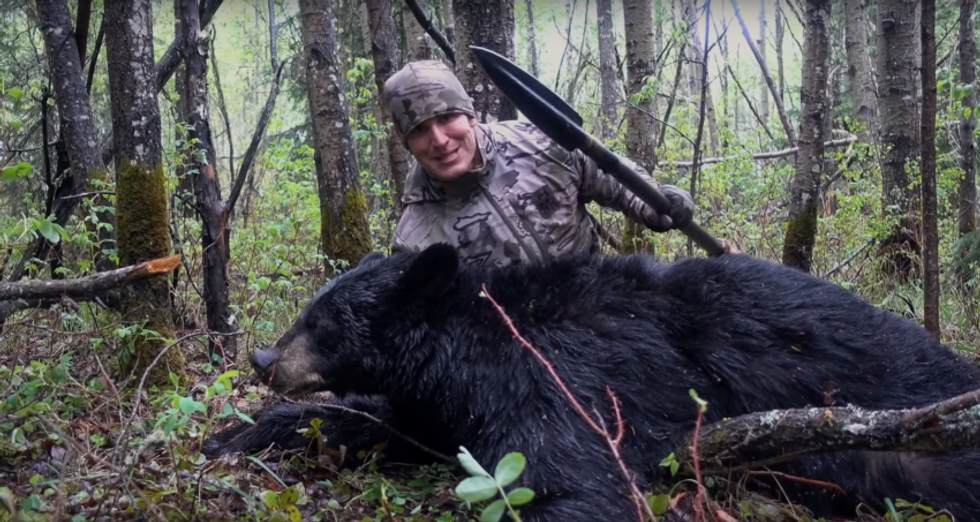 Alberta may file charges against a U.S. hunter who posted a video of himself killing a black bear with a spear, wildlife officials said on Tuesday, as the Canadian province moved to ban spear hunting.

The video, which sparked outrage online, shows hunter Josh Bowmar baiting a trap for the bear in a wooded area and then impaling the animal with a long spear with a camera attached to it.

Bowmar, 26, defended the way he killed the bear while Alberta Environment Ministry spokesman Kyle Ferguson described the hunt as "unacceptable" and "archaic."

"We will introduce a ban on spear hunting this fall," Ferguson said. "In the meantime, we have asked Fish and Wildlife officers to investigate this incident to determine if charges are warranted under existing laws."

Bowmar, a javelin thrower and hunter, uploaded the video in June, local media reported. It appears to have been taken down, but has since been uploaded onto other YouTube accounts.

"I drilled him perfect," Bowmar jubilantly tells the camera. "That was the longest throw I ever thought I could ever make."

Bowmar runs an Ohio-based fitness company and was a university athlete, according to the business' website.

The killing was ethical, and "no one cares more about these animals than us hunters," Bowmar told Reuters in an email. He estimated the bear ran 60 yards (55 meters), then died. He argued that a spear is a more humane weapon than a bow.

In a response to a comment on her Facebook page, Bowmar's wife, Sarah, said on Monday her husband's critics have "nothing better to do."

Local media reported that local outfitters John and Jenn Rivet helped Bowmar in the hunt. They did not respond to requests for comment. The couple's website advertises black bear hunts and features photos of hunters with guns posing next to dead bears.

Bow hunting is legal in Alberta and 19 percent of 119,000 big game hunters in the province last year purchased archery hunting permits, according to a government website. No figures were given for spear hunting permits.

Last year, American dentist Walter Palmer sparked global outrage when he killed Cecil, a rare black-maned lion, with a bow and arrow outside Hwange National Park in western Zimbabwe. The country said it would not charge him because he had obtained legal authority to conduct the hunt.

(Reporting by Nia Williams in Calgary, writing and additional reporting by Ethan Lou in Toronto,; editing by Alistair Bell and Alan Crosby)