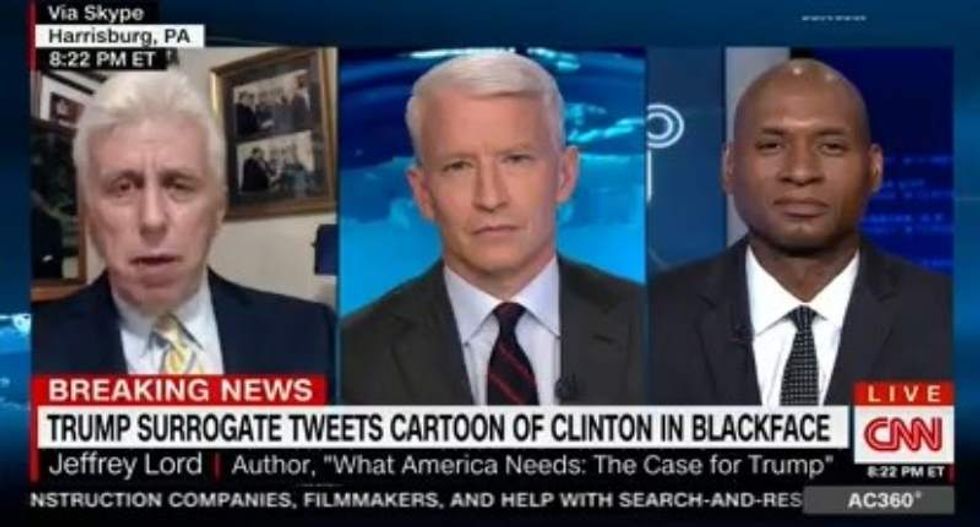 CNN contributor and Donald Trump supporter Jeffrey Lord went back to the well on Monday of trying to blame Democrats for institutionalized racism, only to get called out by fellow guest Charles M. Blow.

"When the Republican Party essentially said to black people, 'We no longer want you -- although you have been with us forever -- we want the people who hate you. That was the major shift from the white segregationists moving out of the Democratic Party and into the Republican Party," said Blow. "Jeffrey knows that. So the fact that Jeff would say, 'For the last 200 years' and basically skip over that history doesn't do service to journalism. It does a disservice to the viewers here. You know better than to say that, Jeffrey. You know that history and you left it out."

Earlier in the segment, Lord had argued that Thomas Jefferson established Democrats' "political formula" when he formed what he called the Democratic Party. This in itself was misleading because the party called itself Republican when it formed and later adopted the name Democratic-Republican.

That approach, Lord said, lasted "all the way up to today with Hillary Clinton's approach to 'super predators,' all of this kind of thing, is basically a political equation: racism plus progressivism equals political power, equals a win. So they construct these hierarchies and go into these communities and say, 'I can be your savior. I can give you the way out. You've got to depend on me. And I just think that that is wrong."

Even as Lord made that accusation, however, Blow had made a similar one regarding Trump's attempt to reach out to black voters -- in part by using the fatal shooting of NBA star Dwyane Wade's cousin in Chicago as "proof" that they should vote for him.

"The message itself is flawed and problematic," Blow said. "There is a distinct whiff of a white savior syndrome here. The message itself is an unremittingly [bleak], desolate view of black America and that he, the savior, is the only person who can save you, black people, from your misery. Because he has offered no kind of redeeming vision of what black culture has brought to America, what it means to be black in America, what the contributions are, you know, what the positives about culture can be."

This past March, Lord was rebuked by Van Jones on two separate occasions for trying to paint the Ku Klux Klan as a "leftist" organization.