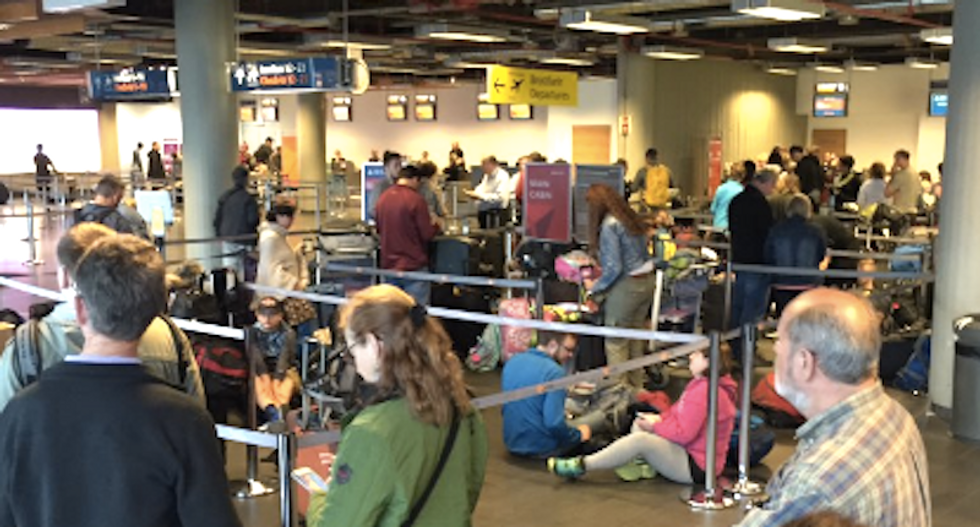 Delta Air Lines Inc said a "major system-wide network outage" on Monday had delayed flights worldwide and technicians were working to resolve the computer problem as soon as possible.

Flights scheduled for departure were not taking off, but those already in the air were operating normally, Delta said in a statement.

Delta operates 5,000 departures a day and is a member of the SkyTeam alliance alongside airlines including Air France-KLM.

It also partners for transatlantic flights with Virgin Atlantic [VA.UL], which said its flights were operating normally but cautioned that passengers should check tickets in case their flight was due to be operated by Delta as part of a code share agreement.

"Our systems are down everywhere. Hopefully it won't be much longer," the airline said on Twitter.

The outage was affecting flights globally, a London-based spokeswoman for the airline said.

Passengers stuck in check-in queues in airports across the world, or on board planes waiting to depart took to Twitter to share photos and frustration at the delays.

"1 hr.+ lines @HeathrowAirport for @Delta due to system outage," tweeted user @MITJAKE with a picture of passengers waiting to check in.

Budget carrier Southwest Airlines Co last month had to halt departures after a technical outage, while American Airlines had to suspend flights from three of its hubs last September after technical problems.

Industry consultants say airlines face an increasing risk from computer disruptions as they automate more of their operations, distribute boarding passes on smartphones and outfit their planes with Wifi.

(Reporting by Abinaya Vijayaraghavan in Bengaluru and Victoria Bryan in Berlin; additional reporting by Sarah Young in London; editing by Gopakumar Warrier and Jason Neely)