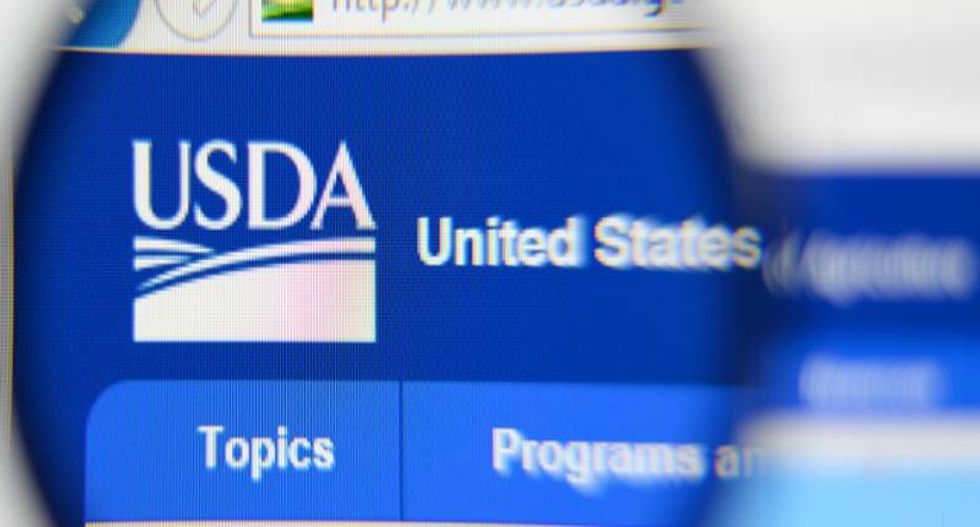 'Photo of the United States Department Of Agriculture (USDA) homepage on a monitor' (Gil C / Shutterstock.com)

The U.S. Department of Agriculture has closed six offices in five states after receiving anonymous threats, a USDA spokesman said on Tuesday, and police were investigating similar threats to faculty members from at least two universities in eastern states.

"Yesterday, USDA received several anonymous messages that are concerning for the safety of USDA personnel and its facilities. As a precaution, USDA has closed offices," department spokesman Matthew Herrick said.

The agency was working with the Federal Bureau of Investigation and local law enforcement agencies to determine whether the threat was credible, Herrick said.

White House spokesman Josh Earnest said the USDA was working with the Department of Homeland Security to ensure the safety of the agency's offices and personnel, but he declined to provide any details about the threats.

"In consultation with the Department of Homeland Security, USDA has taken some prudent steps to ensure the protection of their facilities and their personnel," Earnest told a news conference.

In West Virginia, Jefferson County Sheriff Pete Dougherty said by telephone that his office was notified of the threat on Monday by a USDA employee in the Kearneysville facility, located in the northeastern part of the state.

"It's a threat to do harm to people at the facility until the police arrive. They were going to break into the building," Dougherty said by telephone.

Dougherty said the emailed threat did not name the facility specifically, and was similar to, or the same as, electronic threats sent to other facilities.

In Colorado, an employee working at the United States Geological Survey's offices in Fort Collins, located in the same compound as the USDA building, said the offices were evacuated at around 8:30 a.m. local time on Tuesday by building security.

"They (security officers) were checking to make sure everyone was out and told us to leave," the employee said.

A number of other universities were threatened this week, school officials said.

"Along with individuals at other universities and the USDA, two faculty members at NC State received an email that included a general, unconfirmed threat to campus," the school said in a statement.

Virginia Tech's police chief, Kevin Foust, said in a statement that "other schools have also received cyber-threats," and that the campus was operating normally.

(Reporting by Tim Ahmann in Washington, P.J. Huffstutter and Timothy McLaughlin in Chicago, and Eric M. Johnson in Seattle, writing by Michael Hirtzer; editing by Matthew Lewis and G Crosse)