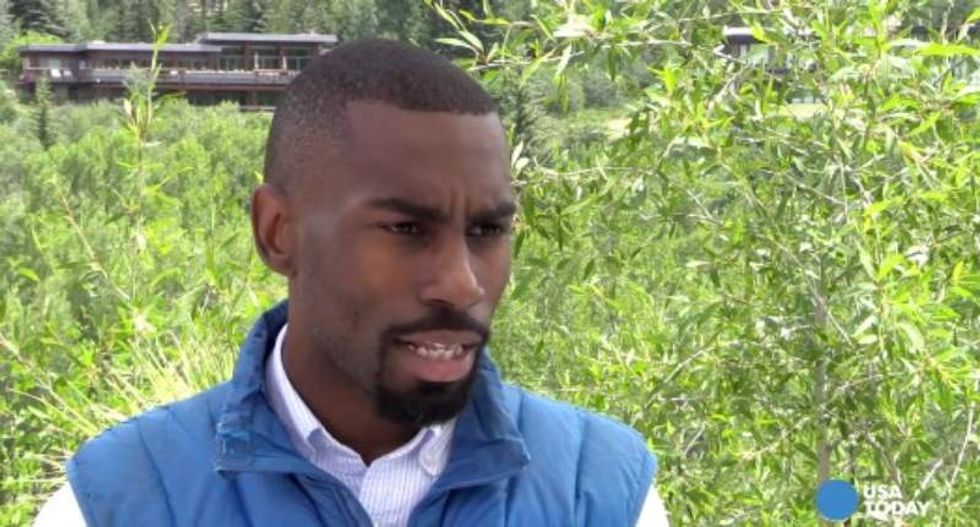 Deray McKesson speaks to USA Today in an interview published on June 29, 2016.

A prominent activist in the Black Lives Matter movement, DeRay McKesson, on Thursday sued the chief of the Baton Rouge police department and other officials over the arrests of nearly 200 demonstrators during peaceful protests about police killings.

In the federal civil rights lawsuit, which seeks class action status, McKesson and fellow protesters Kira Marrero and Gloria La Riva complained that police were unnecessarily aggressive in arresting them on July 9. The lawsuit covers arrests in the Louisiana capital between July 6 and July 11.

The East Baton Rouge Parish Attorney's Office said they had no immediate comment on the lawsuit.

The activists were protesting the July 5 shooting of a black man, Alton Sterling, outside a convenience store, one of a string of high-profile police killings of black people by white officers over the past two years that were caught on video and reopened debate about race and discrimination in the United States.

McKesson, known for his activism on social media and who ran in the 2016 Democratic Party primary for mayor of his hometown of Baltimore, Maryland, said in the lawsuit that demonstrators sought to have all arrest records expunged as well as unspecified damages.

The allegations in the lawsuit include 16 violations of law by Baton Rouge police, excessive use of force, conspiracy to deprive protesters of their civil rights, negligence and arrests without probable cause.

The 23-page complaint said charges of simple obstruction of a highway against nearly 200 protesters who were arrested were ultimately dropped by the local prosecutors office, though they still had to pay administrative and court fees.

"Throughout the protests, the Defendants responded in a militarized and aggressive manner," the complaint said. "All class members now have criminal arrest records, which in this digital age could adversely affect their future employment, education, reputations, and professional licensing."

A day after Sterling's death, another black man, Philando Castile, was shot to death by a policeman during a traffic stop near St. Paul, Minnesota.

Authorities said the shootings of officers by black gunmen were apparently in anger over the deaths of black people at the hands of police, but they were not connected to the peaceful protest movement.