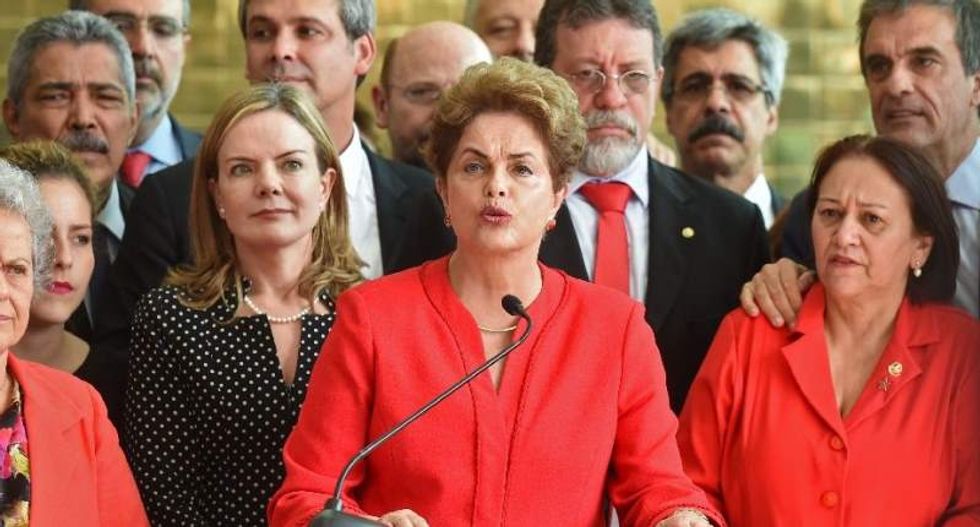 Dilma Rousseff speaks at the Alvorada presidential palace in Brasilia after she was stripped of the country's presidency in a Senate impeachment vote on Aug. 31, 2016. (AFP)

Brazil's Dilma Rousseff was stripped of the country's presidency in an impeachment vote Wednesday and replaced by her bitter rival Michel Temer, shifting Latin America's biggest economy sharply to the right.

Rousseff, 68, was convicted by 61 of the 81 senators of illegally manipulating the national budget. The vote, which exceeded the needed two-thirds majority, meant the veteran leftist leader was immediately removed from office.

Three hours later, Temer -- her center-right former vice president and one time crucial coalition partner whom she now accuses of orchestrating a coup against her -- was sworn in.

Speaking at a televised cabinet meeting afterwards, he promised to launch a "new era" in the crisis-stricken country as he serves out the rest of the current presidential mandate to 2018.

Cheers -- and cries of disappointment -- erupted in the blue-carpeted, circular Senate chamber earlier as the impeachment verdict against Rousseff flashed up on the electronic voting screen.

In a surprise twist, a separate vote to bar her from holding any public office for eight years failed to pass, meaning she could in theory re-enter political life.

Rousseff's lawyer Jose Eduardo Cardozo said he would bring a legal challenge against the impeachment to the high court.

Speaking at the Alvorada presidential palace on the outskirts of the capital Brasilia, Rousseff, from the leftist Workers' Party, condemned her forced exit.

"They decided to interrupt the mandate of a president who had committed no crime. They have convicted an innocent person and carried out a parliamentary coup," she said, defiantly vowing that she'd "be back."

Temer, 75, was to mark his first day as president by flying late Wednesday to China for a G20 summit.

The PMDB stalwart has vowed to steer Brazil away from 13 years of Workers' Party rule in the hopes that a more market-friendly track will resolve the country's worst recession in decades.

Rousseff was accused of taking illegal state loans to patch budget holes in 2014, masking the country's problems as it slid into today's economic disarray.

She told the Senate during a marathon 14-hour session on Monday that she is innocent and that abuse of the impeachment process put Brazil's democracy, restored in 1985 after a two-decades-long military dictatorship, at risk.

Recalling how she was tortured and imprisoned in the 1970s for belonging to a leftist guerrilla group, Rousseff urged senators to "vote against impeachment, vote for democracy."

However, huge anti-Rousseff street demonstrations over the last year have reflected nationwide anger at her management of a country suffering double-digit unemployment and inflation.

Better known as a backroom wheeler-dealer than street politician, Temer took over in an interim role after Rousseff's initial suspension in May.

He immediately named a new government that turned its back on more than a decade of leftist rule in which Brazil saw 29 million people lifted from poverty, but became bogged down in corruption and the ongoing economic slump.

Temer has earned plaudits from investors. It remains uncertain whether he will have voters' support to push through the painful austerity reforms he promises.

His conservative supporters applauded him as he was sworn in, but the opposition boycotted the ceremony.

About 50 leftist demonstrators gathered outside the presidential palace to show their support for Rousseff.

"We are protesting against the coup and fighting for democracy," said 61-year-old farmer Orlando Ribeiro.

On the Senate floor, emotions crackled in the run-up to the vote, then boiled over as senators made final speeches on what both sides of the debate agreed was history in the making.

Renan Calheiros, the Senate president, rejected Rousseff's claim of a coup, saying her impeachment might not have been perfect, but had "the DNA of democracy, the DNA of the constitution."

But Senator Vanessa Grazziotin was scathing in her summing up of an "illegal process that is called impeachment but is a coup."

"Temer does not have legitimacy to govern this country," she warned.

Shaking his fists at the majority backing impeachment, he cried: "They're going in the garbage can of history."

Police had said they were preparing for up to 30,000 protesters in Brasilia on Wednesday in demonstrations for and against Temer. But only a few dozen turned up.