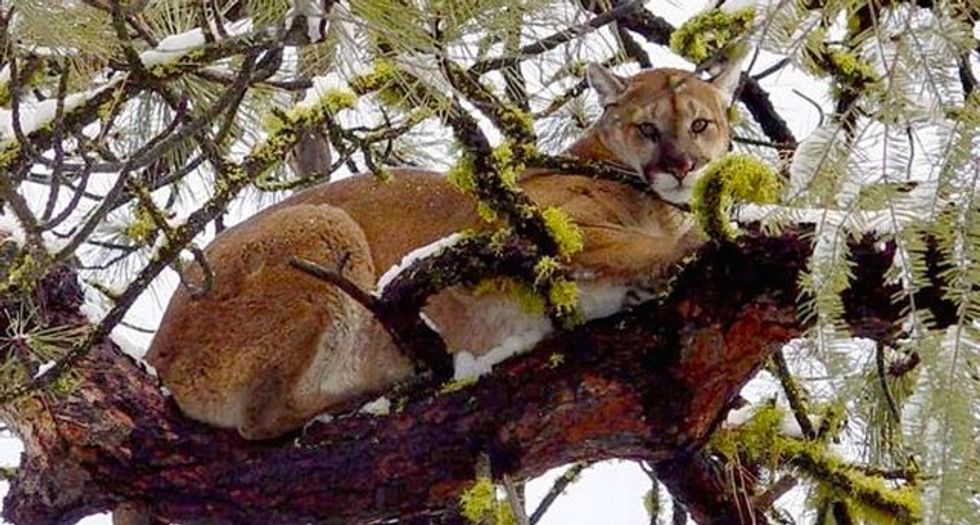 Idaho wildlife managers on Monday praised family members who charged a mountain lion and rescued a young girl from the jaws of the animal which was attempting to drag her off for the kill.

The four-year-old girl suffered minor injuries from the attack Friday evening near a hot springs in eastern Idaho where dozens of relatives had gathered for a reunion, state wildlife officials said. The young male mountain lion believed to be behind the attack was later tracked and killed by authorities.

“She was literally in the mouth of the mountain lion when the quick thinking and heroic reactions of her mother and other adults saved her life," said Gregg Losinski, conservation educator with the state Department of Fish and Game. "The cat dropped her and backed off.”

Losinski said the girl and her young cousins had been put down for a nap in a tent early Friday evening when the child strayed from the campsite and was almost immediately pounced upon by the big cat, also known as a cougar.

The lion had the girl in its jaws and was trying to drag her from the campsite when her mother and other relatives screamed and shouted as they charged the animal, which fled, Losinski said. The name of the girl and her family were not immediately disclosed, although authorities said they were from Idaho.

The family contacted authorities shortly after the attack, which left the girl with scratches, Losinski said. Fish and Game enlisted the aid of a hunter with hounds to track the lion suspected in the incident and local sheriff’s deputies ultimately shot and killed it.

It is rare for mountain lions to attack people and even rarer for one to kill a human, with fatal attacks occurring about once every seven or eight years in the United States and Canada, he said.

No-one in Idaho has been killed by a mountain lion in at least a century, even though the animals, which are subject to regulated hunting, number in the thousands in the state, said Losinski.

A mountain lion last injured a person in Idaho in 2011 when a boy was swiped by a cougar that had killed the child’s pet dog. The only other known case involved a 12-year-old boy on the Salmon River in the early 1990s, according to the Department of Fish and Game.