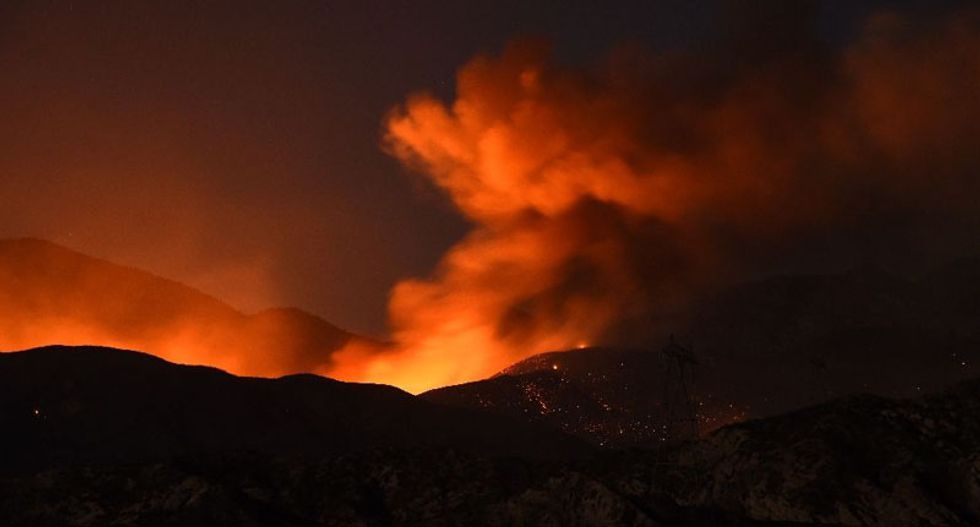 More than 34,500 homes were threatened and 82,640 people were under evacuation warnings as firenadoes -- tornado-like flaming vortexes -- rage in California (AFP Photo/Robyn Beck)

Weary firefighters Thursday battled a raging inferno that was threatening the homes of more than 82,000 people in southern California and sent flaming "firenadoes" tearing across the brush.

Nearly 1,600 firefighters were fighting the giant blaze, but had only contained four percent of it, according to a fire service official.

Dramatic local TV news footage captured from the front line of the wildfire in the town of Phelan showed tornado-like flaming vortexes -- known as "firenadoes" -- sent spinning into the air by the ferocity of the blaze.

"It is very dangerous to the public and also to the firefighters."

The inferno began around 10:30 am (1730 GMT) Tuesday and has already burned through 25,626 acres (10,370 hectares) according to the multi-agency Inciweb information site.

The size of the fire was down from the 30,000 acres reported earlier due to better mapping of the area, the Los Angeles Times reported.

More than 34,500 homes were threatened and 82,640 people were under evacuation warnings.

"There is an imminent threat to public safety, rail traffic and structures in the Cajon Pass, Lytle Creek, Wrightwood, Oak Hills and surrounding areas," Inciweb said.

A dozen fire trucks waited for orders to evacuate Paso Lane, located between several hills that were being devoured by flames, columns of smoke billowing into the sky.

"The whole community is being evacuated," said local firefighter Mike Anderson, who had been battling the blaze with his team for more than 24 straight hours.

"The fire is moving very fast straight through Highway 138, it is still growing."

Chon Bribiescas of the US Forest Service said later that the evacuation area was being expanded, with the wind picking up and the temperature soaring to 100 degrees Fahrenheit (38 Celsius).

"The fire is consuming 100 acres in a few minutes instead of 100 per hour," he told AFP, adding that many residents had decided against the best advice to remain in their homes.

"In California, we cannot force people from their homes, but that means we have firefighters that have to come back to the mandatory evacuation zones instead of fighting the fire.

"I try to tell people that there is nothing in your home that is worth your life."

At a gas station in the outpost of Pinon Hills, 10 miles northwest of the fire, Jeannine Yglesia was buying ice with her 24-year-old son.

"I have 17 to 18 people staying at my house now, friends and their families that have had to evacuate from Wrightwood," she said.

"It's the fourth time in 30 years, but it's the fastest-growing fire I have ever seen," she said, trembling.

The inferno has claimed one high-profile victim so far: the Summit Inn, an old-fashioned diner on the world-famous Route 66 that counted celebrities Elvis Presley and Clint Eastwood among its clientele.

Several roads were closed while two firefighters were injured after they were surrounded by flames. They were treated at a hospital and sent back out to fight the blaze, Inciweb said.

Elaine Bowder, 75, another resident living in the inferno's path, said she may lose her new house.

"We have our important things and we are insured," she said. "But we had to leave one of our cats at home."

"I'm very upset. I'm very attached to her," she added, breaking down in tears.

California is in its fifth year of a record drought, with parts experiencing a heat wave and strong seasonal gusts known as the Santa Ana winds, a recipe for perfect wildfire conditions.

Thousands of firefighters are already committed to several other major fires -- north of San Francisco, in central California's wine region and in the scenic coastal area of Big Sur.