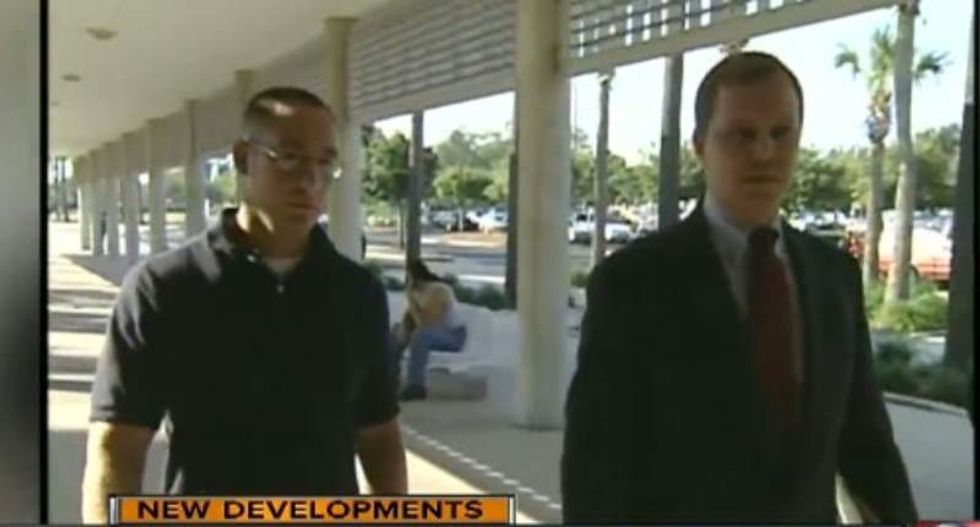 Gary Lynn Durham (left) walks with his attorney following his 2001 arrest in the death of Timothy Gibbs. (WFTS-TV)

A 40-year-old Florida man who was on probation in connection with a road rage death was himself shot and killed on Wednesday morning after an encounter with another motorist, WFTS-TV reported.

Police said Gary Lynn Durham got into an argument with 42-year-old Robert Padgett after Durham stopped his pickup truck in front of Padgett's car. Padgett subsequently fired one round from a handgun, hitting Durham.

The Tampa Bay Times reported that when authorities arrived, Padgett was trying to administer first aid to Durham. Authorities are determining whether the case falls under the guidelines of the state's "stand your ground" law. Padgett has not been charged in connection with the shooting.

"Don't engage with people, it's not worth it over some sort of traffic related incident, or you're five minutes late to work or school, just drive by and ignore the person and don't get into some type of confrontation," a spokesperson for the Hillsborough County Sheriff's Department told WFLA-TV. "It's not worth anybody's life."

Durham was convicted of manslaughter in 2002 in connection with the death of Timothy Gibbs following their own confrontation a year earlier. A witness said at the time that Durham yelled at Gibbs after turning in front of him, then drove into an auto repair shop parking lot where Gibbs was, prompting a shouting match between them. Durham then punched Gibbs in the face, sending him into the concrete head-first. Gibbs died from a skull fracture and a brain hemorrhage.

Durham served 10 years in prison and took anger management classes as part of his sentence. He was slated to remain on probation until next year.

"It's a shame that he didn't learn his lesson while in jail," said Gibbs' widow, Nancy Gibbs. "I'm just glad I don't have to worry about him or running into him somewhere. It's ironic that he died in the same way as my husband."

After being released from prison in 2012, Durham met his wife, Heather, a year later, and married her in February 2015.

"Just because he went to jail, that did not define who he was," Heather Durham told the Times. "He wasn't this angry person who went around angry all the time. People only see the side that the media spreads. They don't know him like I did or his family did."

Watch WFLA's report, as aired on Wednesday, below.