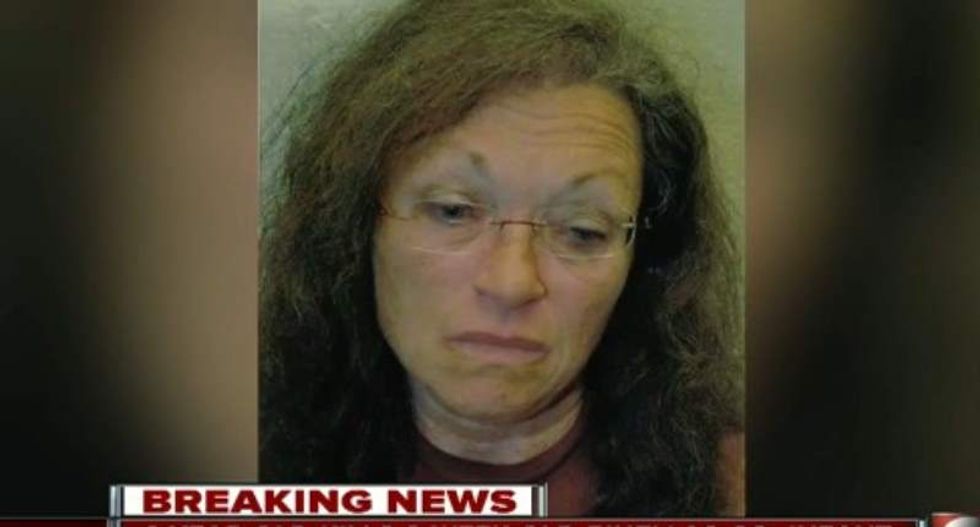 A 62-year-old Florida woman was charged with manslaughter after her 6-year-old son beat her 13-day-old daughter to death inside her minivan while she was running errands, WFTS-TV reported.

Pinellas County Sheriff Bob Gualtieri said the suspect, Kathleen Marie Steele, was "by all accounts unequipped" to be a mother. Both the 6-year-old son -- who will not be charged in connection with the attack -- and her third child, a 3-year-old boy, have been placed in what was described as a "therapeutic foster program."

According to the Tampa Bay Times, the three children were alone inside the vehicle for at least 38 minutes at the time of the incident on Monday.

Gualtieri said that the 6-year-old boy told investigators that he was trying to calm his sister down, but instead slammed her head into the minivan's ceiling, flipped her over, and beating her badly enough to cause "gross swelling" on her face.

"Her skull was cracked in numerous places," the sheriff said at a press conference. "It was one of the worst things I've ever seen, especially [for] a 13-day-old. Her face had just been pummeled."

However, the suspect then ignored the boy when she got back into the car and he told her something was wrong. Instead, Gualtieri said, she ran another errand and did not notice the girl's injuries until returning to their home in North Reddington Beach. Even after doing so, he said, Steele notified a neighbor who works as a nurse instead of calling 911.

The neighbor, he said, "recognized the infant was deceased."

Gualtieri said that Steele tried to make the 6-year-old into a "surrogate father" for his younger siblings, describing the boy as "very, very bright" but troubled.

The girl's death came two days after she was originally slated to be examined by child protection investigators in connection with what Steele called a fall on her head three days after her birth. Steele canceled her appointment with the investigators and had rescheduled it for Aug. 8.

The pregnancy that led to Steele's oldest son's birth was the subject of her appearance alongside her husband on a reality show called I'm Pregnant and 55 Years Old, which aired in 2009. The show reportedly dealt with Steele's efforts to become pregnant again, which culminated in her receiving artificial insemination. Frozen sperm taken from her husband following his death in 2011 also helped her conceive her three-year-old son.