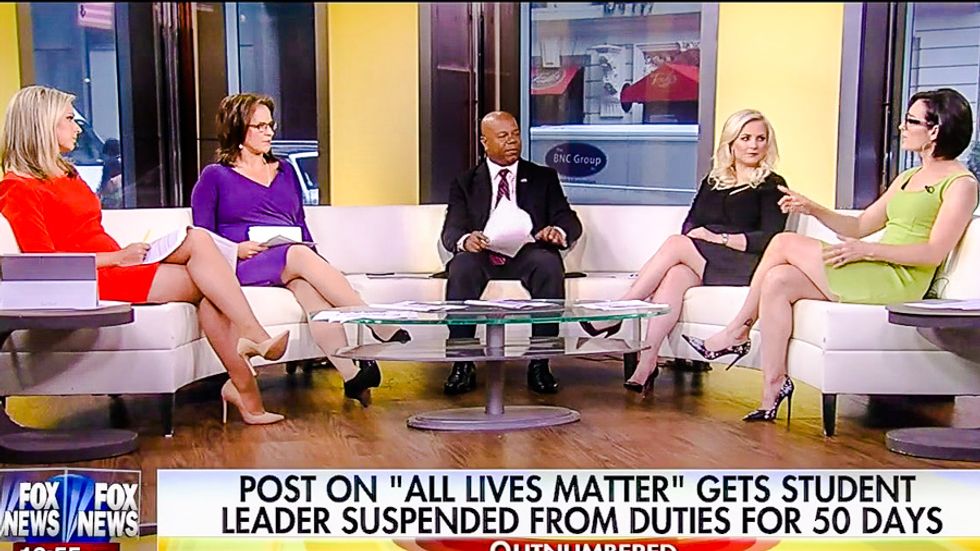 A panel of four white hosts on Fox News decided on Monday that African-Americans should not be offended by people who respond to the Black Lives Matter movement by countering with the slogan "All Lives Matters."

The University of Houston's Student Government vice president, Rohini Sethi, was hit with sanctions last week after she posted a message on Facebook that read: "Forget #BlackLivesMatter; more like #AllLivesMatter"

“For her to say on her social media ‘forget black lives matter,’ it’s almost as if to say if all of us were to die tomorrow, she wouldn’t care,” University of Houston Black Student Union President Kadidja Koné explained to The Washington Post on Monday.

"The penalty was so harsh," host Elizabeth McDonald complained. "The student leader, the president also said... you don't go to jail for First Amendment violations but she deserves tougher sanctions. Who is this guy? He should be tossed out of his job."

"It is such a false argument," co-host Lisa Kennedy Montgomery opined. "It's so offensive because when you say 'All Lives Matter,' you are not intending to say -- for most people -- is black lives don't matter, but that's how it's taken."

McCain asserted that universities would let students "go off on Trump" and "to say the most awful, disgusting, horrific things and there would be no recourse."

"But you say this," McCain added, "you say 'All Lives Matter' and you get demoted and you get your job taken away. That's crazy."

"Is there just no open discourse?" co-host Sandra Smith wondered. "Can you just not have a conversation on college campus anymore without someone being offended or having to delete a Facebook post where someone shares their opinion?"

"I'm for not backing down anymore," Webb said. "You can take your safe space crowd -- it doesn't exist, this is college. This is supposed to be an expansion of our minds."

In a late-night filing on Wednesday evening, attorneys for Donald Trump pushed back at special master Raymond Dearie's demand that the former president state for the record in court if the Justice Department’s inventory of government documents reclaimed from the Mar-a-Lago search by FBI agents is accurate.

According to a report from CNN, the attorneys are now also claiming that Dearie -- who was chosen for the job by Trump-appointed Judge Aileen Cannon at their suggestion -- is going too far and exceeding his authority.

A fourth leak has been detected in undersea gas pipelines linking Russia to Europe, the Swedish Coast Guard said Thursday, after explosions were reported earlier this week in what NATO called "reckless" sabotage.

The Nord Stream 1 and 2 pipelines link Russia to Germany, and have been at the centre of geopolitical tensions as Russia cut gas supplies to Europe in suspected retaliation against Western sanctions following Moscow's invasion of Ukraine.

Judge warns DOJ may have given Trump a shield against Jan. 6 lawsuits

A widely criticized opinion issued last year by the Department of Justice could shield Donald Trump from accountability for inciting the Jan. 6 insurrection.

The department decided to keep defending Trump in a rape defamation case filed by advice columnist E. Jean Carroll, arguing that he was a federal employee when he called his accuser a liar, and thus immune from lawsuits, and a divided appeals court agreed -- over the starkly worded objections of one panelist, reported The Daily Beast.