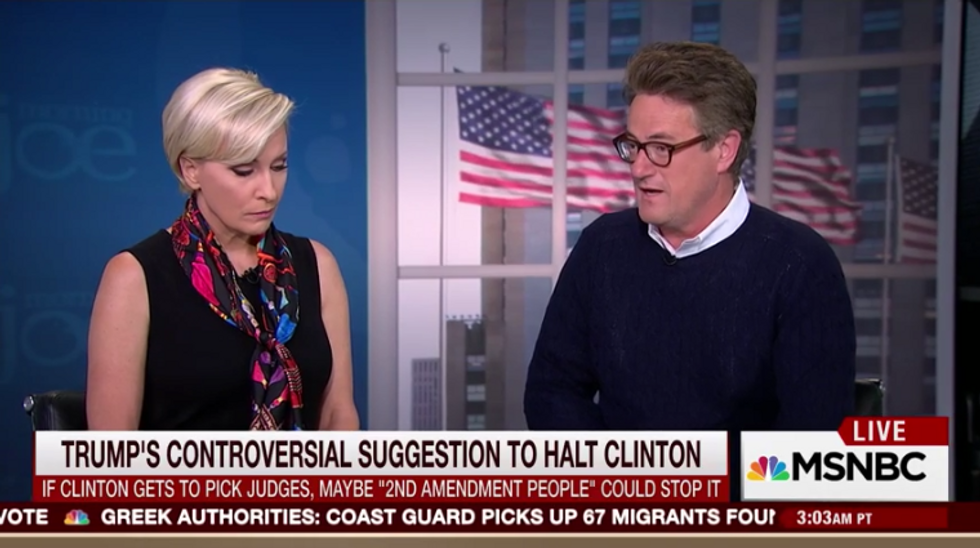 Donald Trump once again sparked an uproar on Tuesday when he suggested that "Second Amendment people" could do something to stop Hillary Clinton from nominating judges if she became president.

The remark was widely interpreted as condoning political violence and Trump was widely condemned by both liberals and conservatives alike.

Wednesday's Morning Joe panel talked extensively about the remark, and co-host Mika Brzezinski once again begged elected Republican officials to rescind their endorsements for the nominee.

The most scathing commentary about Trump, however, came from panelist Mike Barnicle, who tied Trump's remarks on Tuesday with his recent demagoguery about the election being "rigged" this fall.

"In continuation with his constant reference to a rigged election, trying to delegitimize the election process, his comment about the Second Amendment yesterday, in a country that is awash in weapons... in a country that is filled, to a certain extent, with a lot of anger... Donald Trump's candidacy, his candidacy is now toxic to democracy," Barnicle said.

Even panelist Mark Halperin, who has defended Trump on numerous occasions over the past several months, could not mount a defense of the candidate this time.

"Even if you wanted to give their explanation the benefit of the doubt, which is hard to do, you can't say things like that," he said.