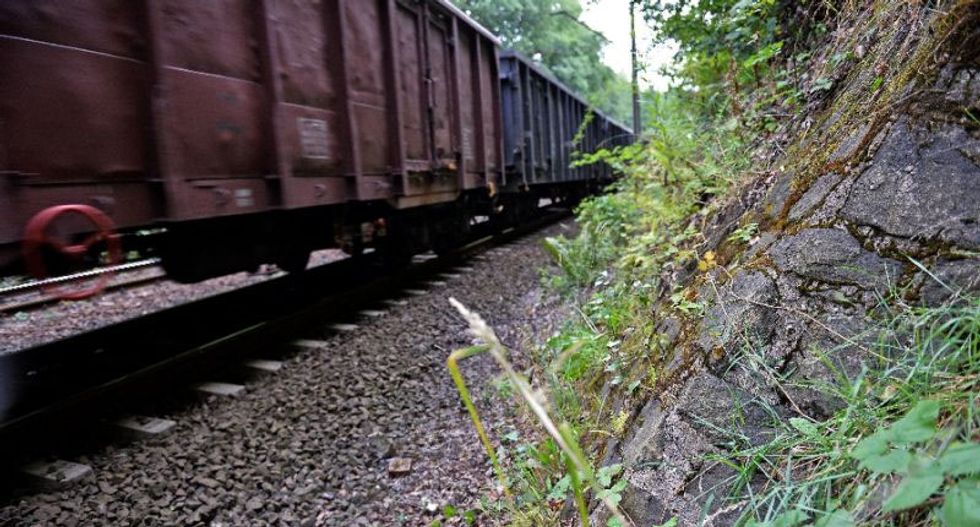 A train passes by the site where a Nazi gold train is believed to be hidden, in the city of Walbrzych, Poland (AFP Photo/Janek Skarzynski)

Treasure hunters on Friday relaunched their search for a lost Nazi gold train allegedly loaded with loot and buried in southwestern Poland, despite there being no scientific evidence it exists.

"The train isn't a needle in a haystack, if it's there, we'll find it," project spokesman Andrzej Gaik told AFP.

The story sparked a global media frenzy last August when two men claimed to have discovered an armoured Nazi-era train using ground-penetrating radar near the city of Walbrzych.

At the time, Piotr Koper, a Pole, and German national Andreas Richter said they had discovered several train carriages measuring a total of 98 metres (320 feet) which were buried some eight to nine metres (26 to 28 foot) underground.

They said they believed the contents were mostly weapon prototypes, though local legend spoke of artwork, jewels and gold stolen by the Nazis.

The Nazis made prisoners of war dig a network of tunnels in the area, and some locals have claimed the Germans tried to spirit the gold away as Russia's Red Army closed in.

But so far there has been little to back up the claims, with geologists from Krakow's prestigious AGH University of Science and Technology finding no evidence of the train's existence during tests run in December.

Professor Janusz Madej said at the time he was "100 percent sure there is no train... maybe a tunnel" based on magnetic, gravimetric and geo-radar studies.

It has done little to dampen the treasure hunters' enthusiasm.

"Even if we find a tunnel, that'll also be a success. The train could be hidden in it," Gaik said on Friday.

As the search began, Koper said he hoped to have answers within a week.

"It should all be clear by Thursday" next week, he told Poland's TVP public news channel as his team began clearing the area of vegetation.

He said they would sweep the area with geo-radar on Monday before diggers move in on Tuesday.

"We'll dig down six metres in three areas along a 100-metre stretch of the old railway tracks," Gaik said.

News about the alleged discovery of the gold train made headlines around the globe last year, triggering an influx of treasure hunters to the site.

The intrigue has been further fuelled by the site's proximity to a massive network of secret underground tunnels built by the Nazis, some of which are around the massive Ksiaz Castle where legend has it the Third Reich stashed looted valuables.