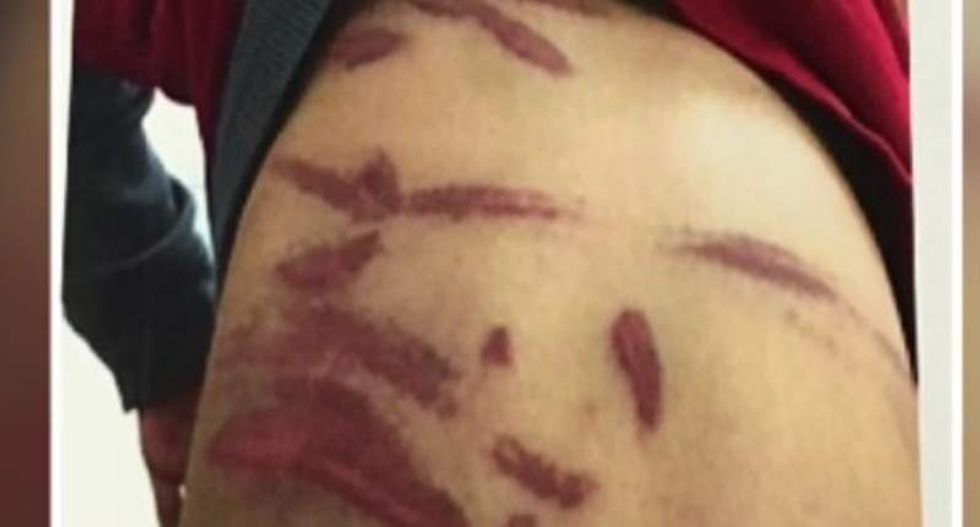 This picture shows some of the injuries sustained by Kin Park Thaing's 7-year-old son after she beat him with a coat hanger. (WTHR-TV)

A 30-year-old Indiana woman facing felony child abuse charges is arguing that she should not be prosecuted under the state's "religious freedom" law, WTHR-TV reported.

Kin Park Thaing said in court that she beat her 7-year-old son with a coat hanger in accordance with her religious beliefs and quoted from the Biblical verse Proverbs 23:13, which states, "Do not withhold discipline from a child: if you strike him with a rod, he will not die. If you strike him with the rod, you will save his soul from Sheol."

According to court documents, Thaing attacked the boy on Feb. 3. She said she hit the boy in order to stop him from endangering his 3-year-old sister.

"I was worried for my son's salvation with God after he dies," she was quoted as saying. "I decided to punish my son to prevent him from hurting my daughter and to help him learn how to behave as God would want him to."

Because of that, she asked for the case to be dismissed, claiming her act was in accordance with the Religious Freedom Restoration Act, which was passed last year. Her request was denied.

WTHR-TV reported that authorities got involved when the boy's teacher saw that he had 36 welts and bruises spread out over his back, neck, and arm. Thaing was also charged with neglect of a dependent and battery.

"We predicted this was exactly was going to happen, is individuals would assert their religious freedom to justify what is clearly criminal conduct," said Marion County Prosecutor Terry Curry.

Thiang, a refugee from Myanmar who was granted political asylum in the US, has already completed parenting therapy she was ordered to attend in a civil case connected to her actions. She said in an affadavit that she "now knows" that there are other ways to discipline one's child besides physical violence.

The head of a local advocacy group, the Burmese American Community Institute, called the use of corporal punishment a "cultural practice" in Myanmar, where police are less likely to intervene unless a parent seriously injures their child. Adjusting to the practices in the US, said Elaisa Vahnie, can be challenging.

They come here sometimes with little or no English. They need to start from scratch," Vahnie explained. "It's a completely different environment."

Thiang is currently slated to stand trial in October.

Watch WTHR's report, as aired on Wednesday, below.

"Trump whisperer" Roger Stone is blaming former special counsel Robert Mueller for a civil lawsuit filed against him by the Department of Justice alleging that he evaded tax payments and defrauded the federal government.

In response to the DOJ lawsuit, Stone's lawyers alleged in a court filing this week, "This case would never have been brought if it didn't involve Roger Stone," according to the Daily Beast.