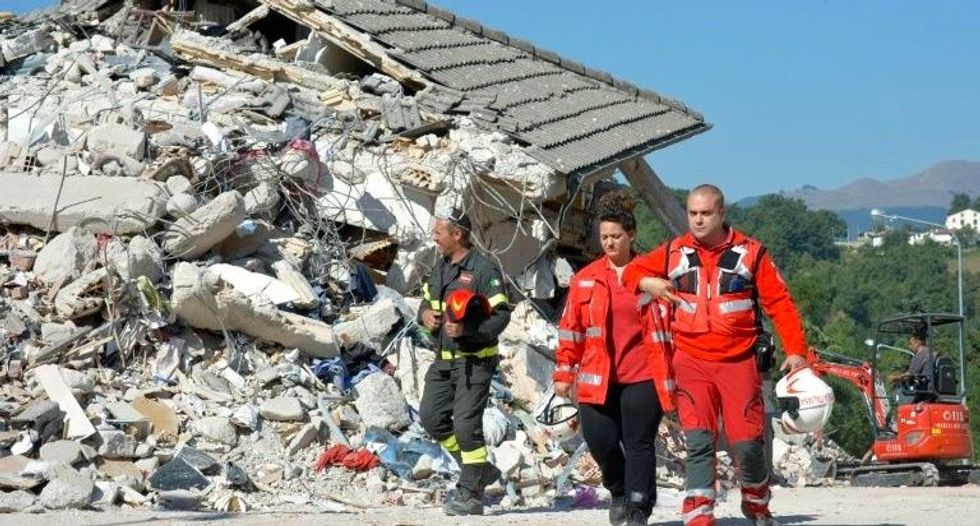 A firefghter and rescuers walk past the rubble of a destroyed building in the damaged central Italian village of Amatrice on August 26, 2016, two day after a 6.2-magnitude earthquake struck the region

An increasingly forlorn search for victims of the earthquake that brought destruction to central Italy entered a third day Friday as a day of mourning was declared for victims of a disaster that has claimed at least 267 lives.

Flags will fly at half-mast across the country on Saturday to coincide with the first funerals.

Releasing the new confirmed death toll, Immacolata Postiglione, head of the Civil Protection agency's emergency unit, indicated there had been no survivors found overnight in any of the remote mountain villages devastated by Wednesday's powerful pre-dawn quake.

At least 367 people have been hospitalised with injuries but no one has been pulled alive from the piles of collapsed masonry since Wednesday evening.

"There is no one under the rubble here but in Amatrice there is still hope that survivors could be found today," survivor Fabrizio Micozzi told AFP in the hamlet of San Lorenzo Flaviano.

Prime Minister Matteo Renzi has declared a state of emergency for the regions affected by Wednesday's quake, which occurred in an area that straddles Umbria, Lazio and Marche.

The first funerals will be held in the city of Ascoli-Piceno for 40 of the victims who died in the villages of Arquata del Tronto and Pescara del Tronto in the mountains of the Marche region.

A total of 46 people died in the two villages. The youngest was born in 2012, the oldest in 1924, according to a list published by the local prefecture.

Some 2,100 people who spent the night in hastily-erected tented villages were shaken by a 4.8 magnitude aftershock just after 6:00 am (0400 GMT).

The tremor underlined the perilous nature of a rescue effort involving more than 4,000 emergency service staff and volunteers.

More than 900 aftershocks have rattled the region since Wednesday's 6.0-6.2 magnitude first one triggered the collapse of hundreds of ill-prepared old buildings across dozens of tiny communities playing host to far more people than usual because of the summer holidays.

- Wearing only a slipper -

Many of the survivors camping out in the tents were carrying plastic bags containing the handful of possessions -- clothes, ID documents, phones and wallets -- they had been able to grab before fleeing their homes in terror.

Over a dinner provided by an emergency cell of an Italian chefs' organisation on Thursday evening, one survivor told how close she had come to being trapped in a house in the tiny hamlet of Illica.

"We shared clothes, there were people going around with one slipper on, those who were basically naked until 11:00 am.

"When dawn came it was devastating because then we really understood what the damage was, and that there were people who couldn't be found, who were missing, who were dead."

Quake experts have estimated that the cost of the short-term rescue effort and mid to longer-term reconstruction could exceed one billion euros.

There are also fears of a negative impact of an already stagnating Italian economy.

Past experience indicates that quakes always have a negative impact on tourism for the whole country in which they occur.

Tourism is particularly important to Italy, contributing around four percent of GDP.

At least eight foreigners were among the dead, according to media reports and updates from foreign ministries.

Rescue workers were notably still trying to clear the wreckage of the Hotel Roma in Amatrice, where 32 people were staying on the night of the quake.

British media, citing an official in Amatrice, said three Britons had died, including a 14-year-old boy.

Romania reported two of its nationals, who were resident in Italy, had died. Spain, Canada and El Salvador all said that one of their citizens had perished.

Renzi's government and local authorities are now facing questions as to why there had been so many deaths in a sparsely-populated area so soon after a 2009 earthquake in the nearby city of L'Aquila left 300 people dead.

That disaster, just 50 kilometres (30 miles) south, underscored the region's vulnerability to seismic events -- but preparations for a fresh quake have been exposed as inadequate.

"Italy should have a plan that is not just limited to the management of emergency situations," Renzi said.

He said that proofing centuries-old buildings against the risk of collapse in the event of a quake would be difficult but that more could be done.

Culture Minister Dario Franceschini said Thursday that 293 historical buildings were damaged or destroyed by the quake, although the most important heritage sites in the region were unscathed.