Joy for Brazil but Olympic swimmers at war over drugs 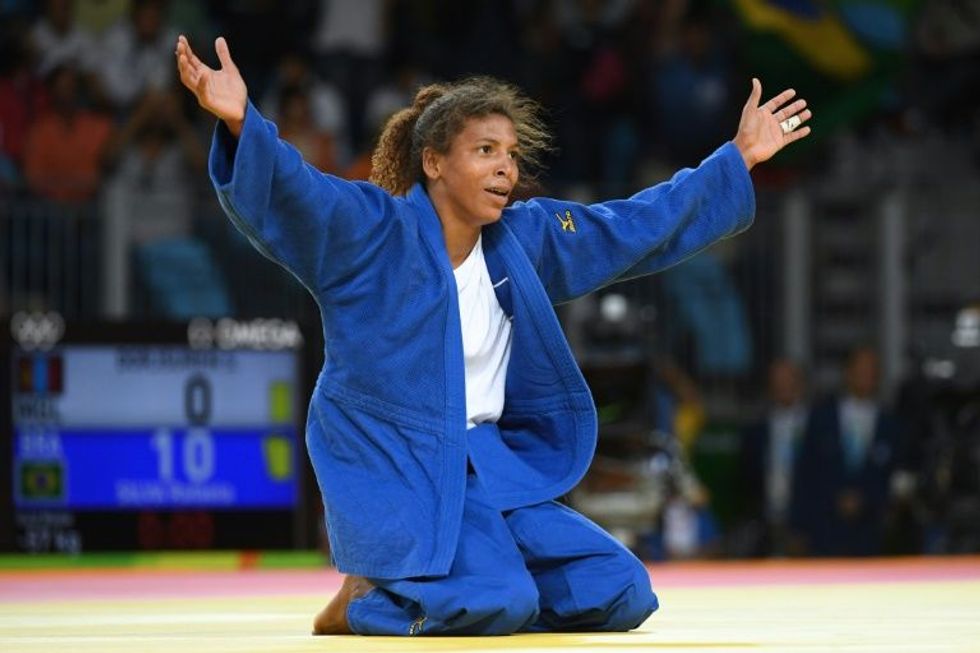 A female athlete from the favelas brought joy to Brazil but there was no let-up in the war between clean and drug-tainted swimmers in the Rio Olympics pool.

Rafaela Silva, who grew up in Rio's notorious City of God slum, sparked pandemonium as she won Brazil's first gold of the Games in the women's under-57kg judo.

Silva upset world number one Sumiya Dorjsuren for what was a hugely welcome win for Brazil after apathy and protests in the run-up to South America's first Olympics.

"It's great for kids who are watching judo now. Seeing someone like me who left the City of God, who started judo at five years of age as a joke," said Silva, 24, who also won the 2013 world title on home soil.

"To be world champion and Olympic champion is something inexplicable.

"If these children have a dream, they have to believe it can be done. I dedicate this medal to the Brazilian people, my family, my friends."

It contrasted with the toxic atmosphere on the Maria Lenk Aquatics Centre pool deck as swimmers and fans again made their feelings known over doping.

Russia's Yulia Efimova, who has twice failed drugs tests, was booed before the women's 100m breaststroke final, and she came under fire again after finishing second.

"We can still compete clean and do well in the Olympic games -- and that's how it should be," said America's Lilly King, after beating Efimova to the wall.

King had earlier made sharp remarks about Efimova, a late confirmation for Rio after wrangling about her doping history, and she pointedly wagged her finger at the Russian after winning their semi-final on Sunday.

"A week ago, I didn't even know if I could race because I'm Russian. I'm just happy to be here," Efimova said.

Doping has cast a shadow over the Games after revelations of state-sponsored cheating threatened Russia's presence and ultimately saw their team slashed by nearly a third.

China's Sun Yang was also embroiled in a row after Australia's Mack Horton called him a "drugs cheat", but he kept his cool to win the men's 200m freestyle on Monday.

Horton's comment about Sun, who served a doping ban in 2014, drew such a furious response from Chinese media that organisers sought to calm trash-talking between athletes.

"But on the other hand of course the Olympics is about respecting others and respecting the right of others to compete," he added.

Chinese patience was also tested by the discovery that a flawed China flag is being used at the Games -- prompting organisers to scramble for replacements.

"We do understand that there is a problem with the flag. It's very small," said Games spokesman Mario Andrada.

"You have to be very familiar with the Chinese flag to understand that. However we need to correct it."

The four small, gold stars on the Chinese flag are pointing upwards rather than towards the bigger star, as they are supposed to, a mistake which was poorly received by patriotic Chinese.

Japan's 'King Kohei' Uchimura led Japan to victory in the men's team gymnastics, completing his collection of major titles in the sport.

And a typically relaxed Usain Bolt shimmied with semi-naked samba dancers as he said he was ready to take on the "Treble-Treble" -- his third 100m, 200m and 4x100m sprint sweep -- in his final Games.