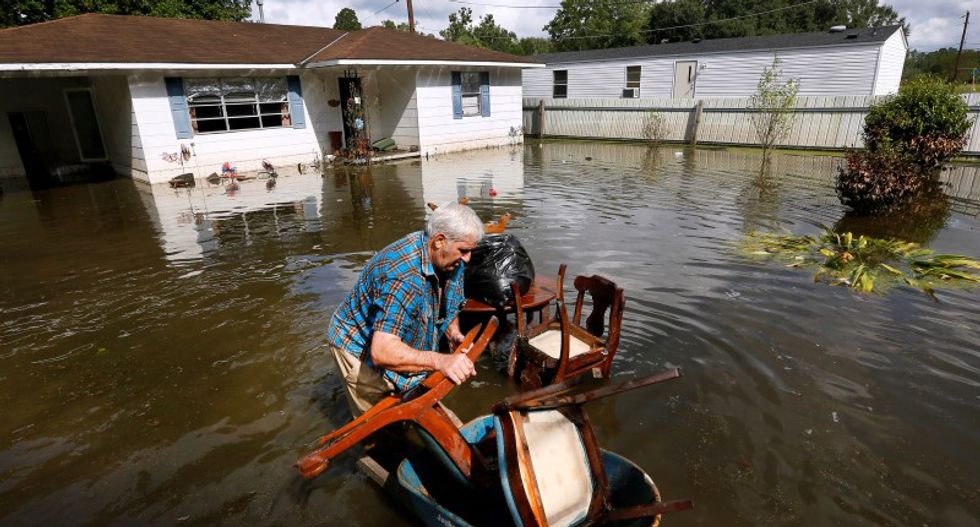 Quenton Robins watched on Sunday morning as a giant metal claw clamped down on his mother's ruined belongings, snapping wooden cabinets with an audible crack as the operator of a giant mechanized arm slowly cleared a mound of debris from her yard in Baton Rouge.

Five feet (1.5 meters) of water swept through the homes in the quiet Park Forest neighborhood just over a week ago, shocking residents who had been told they did not live in a flood zone.

As efforts in Louisiana turn from rescue to recovery, renters and homeowners who do not have flood insurance are facing an uncertain financial future.

Private insurers do not cover flood damage and flood insurance in the United States is underwritten by the Federal Emergency Management Agency. Homeowners who live in designated high-risk flood zones are required to carry flood insurance if they have a federally backed mortgage.

In Louisiana, an estimated 42 percent of homes in high-risk areas have flood insurance, according to FEMA. Only 12.5 percent of homeowners in low and moderate-risk zones do.

Many of the areas hit hard by record rainfall last week were not considered at high risk for flooding.

Those residents without flood insurance are eligible for up to $33,000 in FEMA individual disaster assistance funds, although most will likely receive less than that, based on payments following other major disasters.

After Hurricane Katrina in 2005, FEMA paid $6.6 billion to approximately 1.07 million households and individuals in Louisiana, Mississippi and Alabama, an average of just over $6,000 per grant, according to agency figures. Superstorm Sandy in 2012 produced an average payout of under $8,000 for about 180,000 residents of New York and New Jersey.

"It's not designed to make survivors whole again," said Lemaitre, adding that FEMA recommends all homeowners obtain flood insurance regardless of the risk in their area. He also said residents could apply for low-cost loans from the Small Business Administration.

FEMA has approved more than $55 million in aid so far and some 106,000 Louisiana residents have registered for emergency assistance after the record floods, which killed at least 13 and damaged more than 60,000 homes.

Down the street from Robins' mother, retired widow Betty Bailey sat in the shade of her carport, waiting for her damaged possessions to be taken away.

Bailey, who did not have flood insurance, said she moved to the neighborhood in part because it is not in a flood zone. When she applied for FEMA aid, she said they recommended she look into loans to cover her losses.

"How do they know I can afford a loan with all the bills I already have?" Bailey said. "That's not right."

Looking out at her neighborhood, Bailey added, "Some of these houses will never be built back."