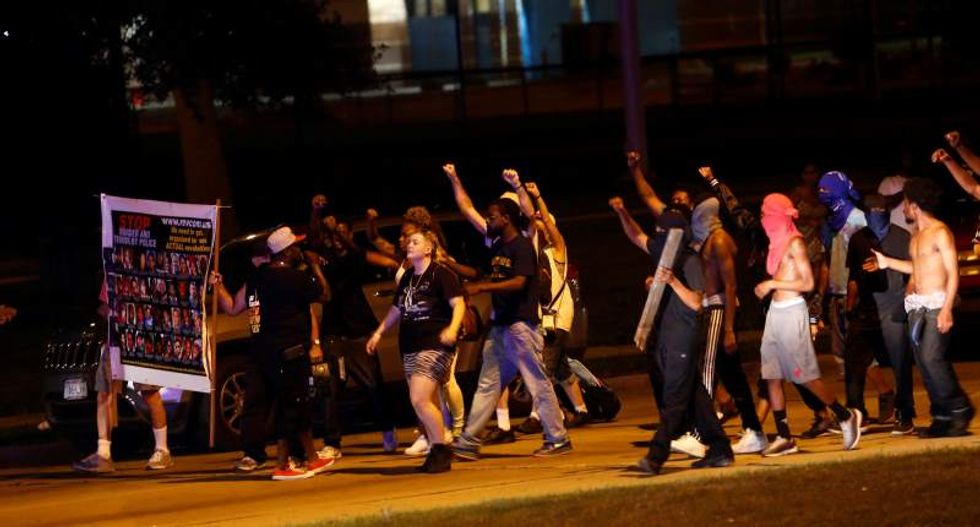 Protestors march toward police lines during disturbances following the police shooting of a man in Milwaukee, Wisconsin. (Reuters/Aaron P. Bernstein)

Tension gripped Milwaukee on Monday as officials hoped a late night curfew imposed on teenagers would deter another outbreak of rioting that hit the U.S. Midwestern city the past two nights in response to the police shooting of an armed black man.

Late on Monday afternoon, dozens of police, some in riot gear, erected fencing to cordon off Sherman Park, the center of the neighborhood that was the scene of the weekend shooting and subsequent disturbances. Nearby, about 100 people held a picnic in a grassy area.

"Things got a little bit quieter last night, although there were still disturbances," Wisconsin Governor Scott Walker told Fox News, "but our hope is tonight things will finally quiet down thanks in large part to the leadership of many pastors and other church leaders in the Milwaukee community."

As the sun set, there was notably lower foot traffic in the neighborhood ahead of the 10 p.m. CDT curfew. Police vehicles were seen parked in alleys and along major thoroughfares in that area of the city.

"There is a curfew that will be more strictly enforced tonight for teenagers," Mayor Tom Barrett told a news conference. "So parents, after 10 o'clock your teenagers better be home or in a place where they're off the streets."

Barrett renewed his call for state officials to release a video of the Saturday night shooting in hopes it would convince angry protesters that deadly force against Sylville K. Smith, 23, was justified.

Milwaukee has become the latest American city to be gripped by violence over the past two years in response to fatal police confrontations with black men.

Famed for its breweries, Milwaukee is also one of the most segregated cities in America, with a large concentration of unemployed black men in the inner city separated from the mostly white suburbs.

Such inequality has afflicted many U.S. cities as a result of the loss of manufacturing jobs over the past three decades, sometimes stoking unrest when police use deadly force.

Police say Smith was stopped on Saturday afternoon for behaving suspiciously and that he then fled on foot between two homes. Smith was carrying a stolen handgun he refused to drop before he was killed, police said.

The shooting led to a first night of violence in which gunshots were fired, six businesses were torched and 17 people were arrested. Police reported four officers were injured and police cars were damaged before calm was restored.

On Sunday night, when police in riot gear faced off with protesters throwing bottles and bricks, four officers were injured and one other person suffered a gunshot wound, police said. Three police squad cars were damaged and 14 people were arrested, authorities said.

'I WANT THE VIDEO RELEASED'

Wisconsin Governor Scott Walker activated the National Guard on Sunday in case more trouble flared, but despite the violence, police said the guardsmen were not called in.

The weekend shooting in Milwaukee was distinct in that the person killed was armed, according to the police account. The officer who fired the deadly shot was also black.

The mayor would like Wisconsin state officials to release the video to the public in order to corroborate the police account. State law requires all police shootings to be investigated by an independent state agency, giving the state control over such evidence.

"I want the video released. ... I'm going to urge that it be released as quickly as possible," said Barrett, who has yet to see it.

Police Chief Edward Flynn said on Sunday that video from the officer's body camera showed Smith had turned toward the officer with a gun in his hand.

The video appeared to show the officer acting within the law, Flynn said, but because the audio was delayed, it was unclear when the officer fired his weapon.

Police had stopped Smith's car, leading to the chase on foot.