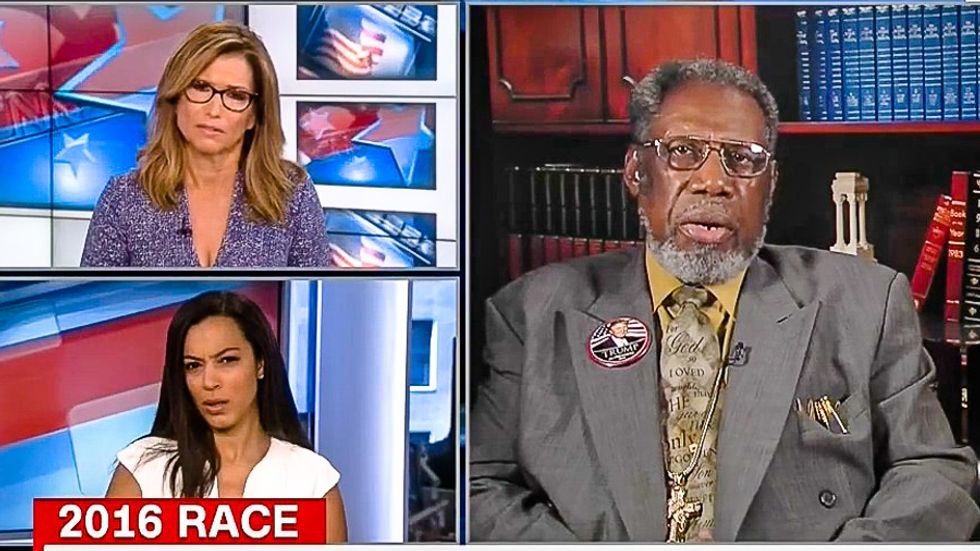 A North Carolina pastor who has endorsed Donald Trump explained his job plan on Tuesday, which calls for the "return" of black Americans to Africa to build roads and bridges.

"African-Americans are the only people in the world who do not seek dual citizenship," Rodgers said. "That's why Chicago gangs, California gangs, the Crips and the Bloods and Detroit in Michigan -- we have gangs in the streets because blacks have no vision, they have no leadership."

"You've also talked about building a road back to Africa," Costello noted. "Can you explain that?"

Rodgers replied: "Matter of fact, where our ancestors came from, from the Indian Ocean all the way across the Atlantic Ocean, that's 4,000 miles and we want to go back and help with the highways all the way across, to create jobs, train rails, pipelines, oil, petroleum. They create jobs for young people that can't find jobs here, that the Democrats have not did."

"I think it would give young people in prison [jobs] just like Great Britain did," he opined.

"So you are suggesting young people in trouble should go back to Africa, perhaps to find jobs?" the CNN host pressed.

"Not to go back, but I say to return," Rodgers insisted. "It's a clause in the United Nations charter, our right to return, to help build infrastructure. Everybody don't want to stay here. We are skilled people."

Democratic strategist Angela Rye pointed out that building a "literal" bridge back to Africa was "probably impossible."

"I apologize for laughing," Rye added.