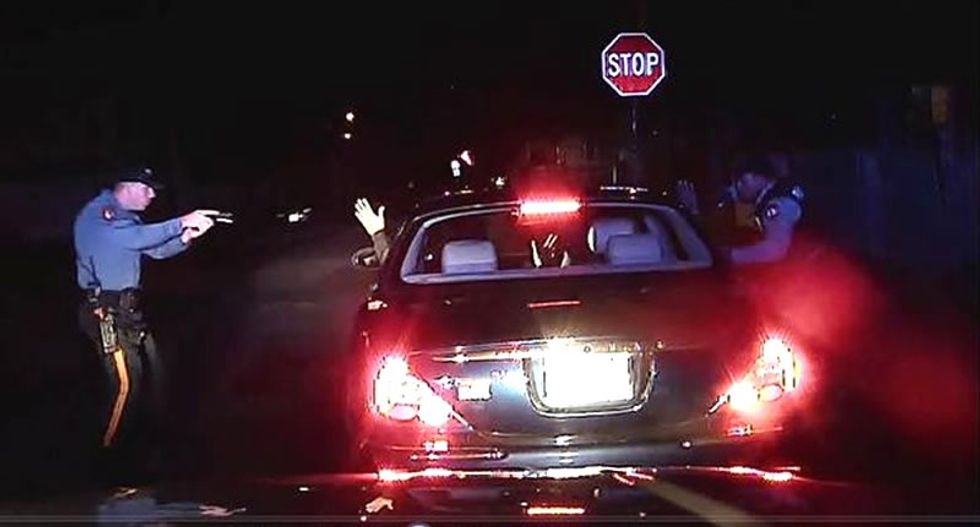 Bridgeton, New Jersey police during a traffic stop before they shot and killed Jerame Reid on Dec. 30, 2014 (Screenshot)

Federal prosecutors on Monday declined to bring criminal charges against a police officer in New Jersey who fatally shot a black man as he exited a car with his hands raised during a routine traffic stop.

The December 2014 slaying of Jerame Reid in Bridgeton prompted protests in the city similar to demonstrations that have been held across the United States in response to a series of fatal police shootings of unarmed black men.

Reid was killed by Bridgeton Police Officer Braheme Days after the driver of the car in which Reid was riding was pulled over on suspicion of ignoring a stop sign, according to the U.S. Attorney's Office for the District of New Jersey.

"Viewing the evidence as whole, the government determined that federal charges are not warranted," U.S. Attorney Paul Fishman said in a statement.

The charging decision follows a $1.5 million tentative settlement agreement Reid's family reached about a month ago with the city of Bridgeton and the officers.

Video of the incident shows Days approaching the parked car on Reid's side. "Hey, how are you all doing?" he says before asking why they had not stopped at a stop sign.

Within a few seconds, Days pulls out his gun and tells his patrol partner, Roger Worley, who is white, that there is a gun in the glove compartment.

He also shouted at Worley to get the men out of the car.

The video shows Days reaching into the car and removing what appears to be a gun and dropping it to the ground. Days repeatedly orders the men not to move and show their hands.

Days steps back from the car, and Reid emerges with his hands up around shoulder height.

Almost instantly, both police officers shoot at him. At least six shots can be heard as Reid falls to the ground.

Although Worley also fired his weapon, only the shots fired by Days struck Reid, the U.S. Attorney's Office said.

A lawyer for the family did not immediately respond to a request for comment, nor did the Bridgeton Police Department.