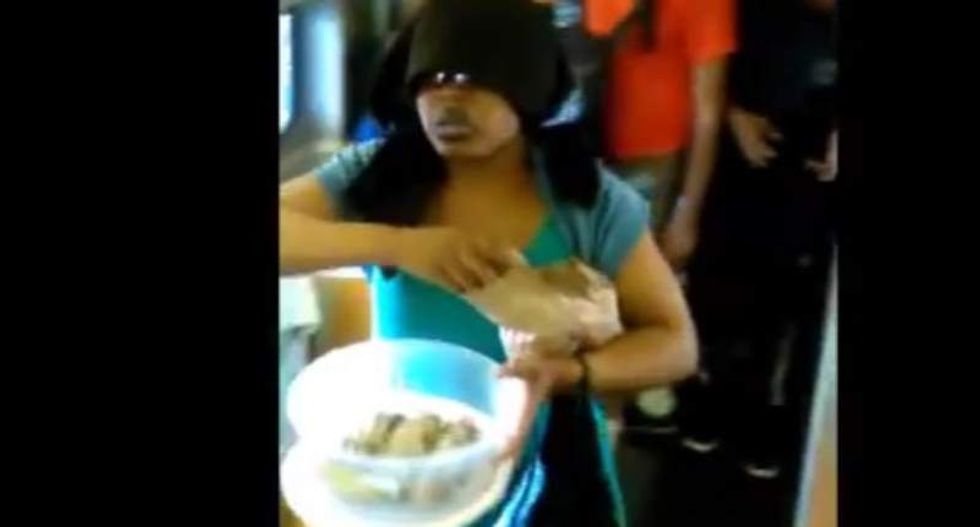 A woman identifying herself as Zaida Pugh poses as a homeless woman as part of a prank on a New York City subway train. (YouTube)

It could have been a scene straight out of a horror movie.

A woman who said she was selling crickets and worms on a crowded New York City subway car appeared to become frazzled by some teenagers and let the critters loose on riders, then urinated on herself, according to social media posts and news reports.

Riders on the subway train were locked in close quarters with the bugs for half an hour during rush hour on Wednesday evening after a passenger pulled the train's emergency brake while they were on the Manhattan Bridge.

Two days later, on Friday, a woman who identified herself as Zaida Pugh came forward, saying she staged the episode as a prank to raise awareness of how people treat the homeless. She said she is an actress and was not concerned about a backlash from inconvenienced commuters.

"Of course they'll be angry with me, but I guess I'm just doing me. I'm waking people up with my shows, my acts," she said by telephone.

The teenagers, whom she said were also acting, had pushed her as she offered the creepy-crawlies for sale, and knocked the container holding them into the air.

After the crickets were set free, some of them jumped on passengers, who apparently were not in on the prank.

"Never seen a crowd get so panicked so fast, everyone rushed to the other side of the train," one rider, Ezra Mechaber, wrote on Twitter. "Mass hysteria in a locked, enclosed space is something else."

Some people whipped out smartphones and began recording.

In one video posted online, the woman yelled, "Why'd you have to hit me?" and "My crickets!"

In another, the woman is seen screaming uncontrollably as riders tried to console her.

The D train, which connects the boroughs of the Bronx with Brooklyn via Manhattan, was stopped on the bridge spanning the East River. After it began moving again, police officers met the train at the next station.

No one was injured and a New York Police Department spokeswoman said on Friday that they took the woman to a hospital for psychiatric observation. Police had received no complaints about the episode being a prank, the spokeswoman said.

Watch footage of the apparent prank, as posted online, below.