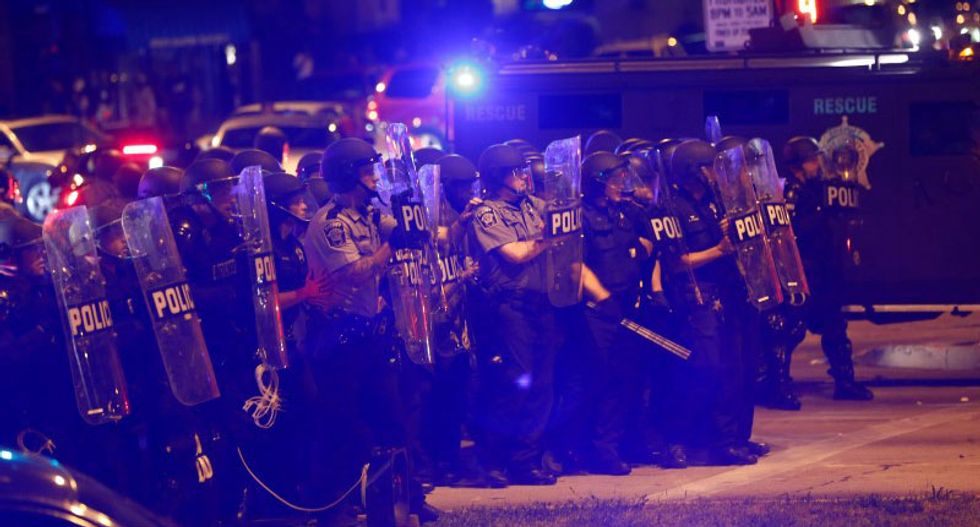 Tension flared again overnight in Milwaukee, with one person shot and a police officer injured in the second night of riots triggered by the fatal shooting of a suspect by an officer.

Police violence against African-Americans has ignited sporadic, sometimes violent protests in the past two years. It also has prompted a national debate over race and policing while fuelling the growth of the Black Lives Matter civil rights movement.

Violence erupted in Milwaukee on Sunday after peaceful vigils by small groups of demonstrators, and police said late that night that they had rescued one shooting victim, who was taken to a hospital. It was not immediately clear if the injured person was a protester.

One police officer was hospitalized after a rock smashed a patrol car windshield, the city police department said. Another squad car was damaged by rioters hurling bricks, rocks and bottles, it said, adding that officers made multiple arrests.

Police said they began trying to disperse crowds after shots were fired and some protesters threw objects. A tense standoff continued into the early morning hours, punctuated by intermittent reports of gunfire.

Wisconsin Governor Scott Walker had activated the National Guard in case more trouble broke over the death of Sylville K. Smith, 23, who was shot while fleeing a traffic stop.

Despite the violence, police said the National Guard had not been called in, as authorities worked to restore order.

Aiming to reassure the community that the police acted properly, Chief Edward Flynn told a news conference on Sunday that video from the officer's body camera showed Smith had turned toward him with a gun in his hand.

Earlier on Sunday evening, about 200 people had gathered to light candles near the spot where Smith was killed in the Sherman Park neighborhood. A few officers looked on as faith and community leaders implored protesters to restrain their anger.

"We are not ignorant and stupid people," one pastor told the crowd, echoing a feeling among many of the city's African-Americans that they are systematically mistreated.

"Every single person needs to be looked upon as human beings and not like savages and animals."

On Saturday night, shots were fired, six businesses were burned and police cars damaged before calm was restored in the area, which has a reputation for poverty and crime. Seventeen people were arrested, and four officers were injured.

At the news conference with Mayor Tom Barrett, Flynn said the officer who fired the fatal shot was black, and media reports also identified Smith as black.

He said a silent video of the incident appeared to show the officer acting within the law. The officer had stopped Smith's vehicle because the driver was behaving suspiciously and then had to chase him on foot into an enclosed space between two houses, Flynn said.

Because the audio was delayed, he said, it was not clear when the officer fired his weapon.

"I'm looking at a silent movie that doesn't necessarily tell me everything that will come out in a thorough investigation," Flynn said.

"Based on what I saw, didn't hear, don't know what the autopsy results are going to be, (the officer) certainly appeared to be within lawful bounds."

Barrett said Smith did not drop the gun as ordered before he was shot.

The mayor said Smith had a lengthy arrest record, and officials had earlier said he was carrying a stolen handgun loaded with 23 rounds of ammunition when stopped.

"SHOT IN HIS BACK"

On Sunday evening, several of Smith's sisters addressed the crowd, saying their brother did not deserve to be shot.

Walker announced the National Guard activation after a request from Milwaukee County Sheriff David Clarke. But Barrett said any decision to deploy the troops would come from the police chief.

The National Guard, which is under the dual control of the federal and state governments, was deployed in Ferguson, Missouri, in August 2014 after several nights of rioting over the police killing of an unarmed black man.

This summer has brought deadly ambushes of police. Five officers were slain by a sniper in Dallas last month as they guarded an otherwise peaceful protest against police killings. A gunman killed three officers in Baton Rouge less than two weeks later.

Policing in Milwaukee has come under scrutiny since 2014, when a white officer killed Dontre Hamilton, a mentally ill, unarmed black man, in an incident that sparked largely peaceful protests.