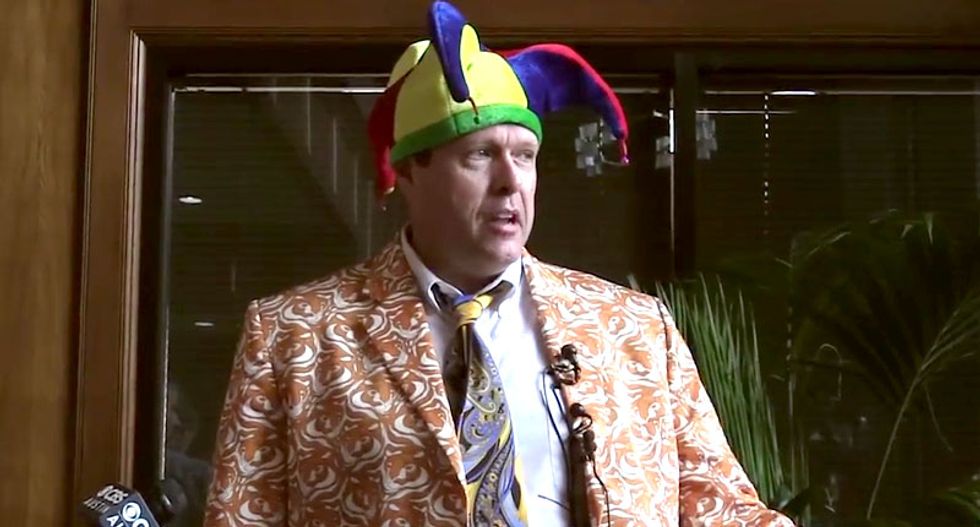 The brief, zany tenure of Travis County GOP Chairman Robert Morrow came to an end Friday, as party officials made clear the conspiracy theorist abandoned his post by running for president and he accepted their conclusion without question.

Inside a nondescript office park in Austin, party officials convened reporters to lay out their case, saying Morrow's application to be a write-in candidate for the White House, filed last week, "resulted in an immediate vacancy" at the top of the county party. Waiting in the lobby afterward was Morrow, wearing his trademark jester's hat and carrying the "Trump is a Child Rapist" sign that had got him booted from a rally for the Republican presidential nominee Tuesday in Austin.

"I'm in complete agreement with them because I'm running for president," Morrow said of party officials' conclusion. "It's clear: You can't be the president of the United States of America, or even run for president, and be the chairman of a political party, and I'm fine with that."

It marked a relatively noncontroversial finish to Morrow's controversial tenure, which was sparked by his surprise victory over incumbent James Dickey in the March elections. Alarmed by Morrow's conspiracy theory-fueled bombast and disinterest in actually running the organization, party officials created a steering committee in June that handled many of the duties typically reserved for the chairman.

But the party was harshly reminded in recent days that perception is reality when Morrow showed up at Trump's events with the "child rapist" sign, drawing attention from those not entirely familiar with his unconventional role in the party. Morrow had claimed GOP officials were trying to oust him due to his anti-Trump tactics, but on Friday, acting chairman David Duncan told reporters Morrow had simply done broad damage to the party brand, from its reputation to its finances.

As for whether the county party was defying the will of the voters — which gave Morrow 56 percent of the vote in March — Duncan said he did not expect a revolt.

"Not at all," Duncan said. "I don't think most people realized who or what he was" when they voted for him.

The writing was on the wall Thursday, when word got out that the secretary of state's office accepted Morrow as a write-in presidential candidate. By the end of the day, the county party was getting backup from the state party, whose chairman Tom Mechler issued a statement affirming that Morrow became ineligible to serve as county chairman upon filing for president.

On Friday, Morrow did not exactly say whether he knew that when he applied to be a write-in candidate he was effectively resigning from the county party. "I knew in the back of my mind," Morrow told reporters, "it might cause a problem."

The party now faces a Sept. 20 meeting where it could elect a permanent replacement for Morrow. Duncan, the acting chairman, said he was not sure yet whether he would run for that position.

Duncan did, however, make clear that the party’s problems over the past several months have gone beyond Morrow. He appeared to reveal for the first time that Dickey had “left the party with no office, almost no money” and that the steering committee had since raised about $6,000 to begin replenishing its coffers.

While Morrow signaled no disagreement with his ineligibility Friday, there was a measure of drama. As he spoke with reporters in the lobby, a member of the county party steering committee, Joe Pojman, interrupted, asking him to leave and threatening to call 911 if he did not. Morrow initially resisted, claiming he had been given permission by five people he had just met in a nearby office and pressing Pojman to say whether he supports Trump.

But after taking one more question — with Pojman dialing something into his phone beside him — Morrow agreed to leave. Outside the building, Morrow recited one of his most ubiquitous conspiracy theories one more time — one involving Trump and pedophilia — and then as reporters dispersed to their cars, the former county chairman broke into an impression of former President Bill Clinton.