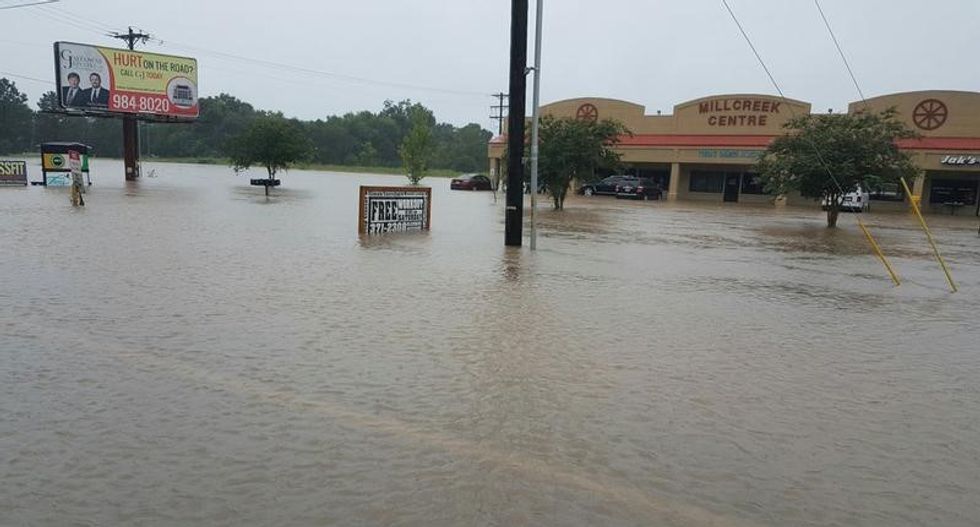 U.S. President Barack Obama issued a disaster declaration on Sunday for flood-ravaged Louisiana, where at least five people have died and emergency crews have rescued more than 7,000 people stranded by historic flooding.

Governor John Bel Edwards said residents had been pulled from swamped cars, flooded homes and threatened hospitals across the southern part of the state. The already soaked region is expected to get more rain from a storm system stretching from the Gulf Coast to the Ohio Valley.

While the brunt of the storm that brought torrential rains was moving west toward Texas, Louisiana residents should remain cautious, the governor said at a news conference.

"Even with the sunshine out today intermittently, the waters are going to continue to rise in many areas, so this is no time to let the guard down," Edwards said, calling the flooding unprecedented.

Obama issued the disaster declaration after speaking with Edwards, the White House said in a statement.

The initial declaration makes federal aid available in the parishes of East Baton Rouge, Livingston, St. Helena and Tangipahoa. Edwards said in a statement that other parishes could be added to the list.

Emergency officials still were working on strategies to rescue an undetermined number of people trapped by the waters.

"We're very much still in the search and rescue mode," said James Waskcom, director of the state's Office of Homeland Security and Emergency Preparedness.

In Livingston Parish, phone service was spotty due to the high waters and most shelters were full. A Greyhound Bus traveling from Memphis, Tennessee, to Baton Rouge was diverted to a shelter because of flooded roadways.

About 5,000 people had been forced to sleep in shelters overnight around the state, said Marketa Walters, head of Louisiana Department of Children and Family Services.

Some 1,700 members of the Louisiana National Guard have been deployed for rescue efforts.

Even as the state grappled with high waters, the National Weather Service forecast heavy rain from the Gulf Coast as far north as the Ohio Valley through Monday, with a threat of flash flooding.

A flash flood watch was in place until Monday morning for Houston, where rains killed at least eight in late April.

At least five people had died in Louisiana from the high water. Ronda Durbin, a spokeswoman for Tangipahoa Parish, said by telephone that searchers on Sunday recovered the body of a man reported swept away on Friday.

The body of a woman also was recovered from a submerged vehicle in the parish, she said.

On Saturday, the body of a woman was recovered from the Tickfaw River, in St. Helena Parish northeast of Baton Rouge, after a car in which she was riding was swept away.

A 54-year-old man in Greensburg in the northern part of the state died when his vehicle was swept off the road, state police said.

The body of a 68-year-old man was recovered on Friday near Baker after he drowned, said William "Beau" Clark, the coroner in East Baton Rouge Parish.

(Additional reporting by Ian Simpson in Washington and Laila Kearney and Chris Prentice in New York; Editing by Bill Trott and Richard Chang)