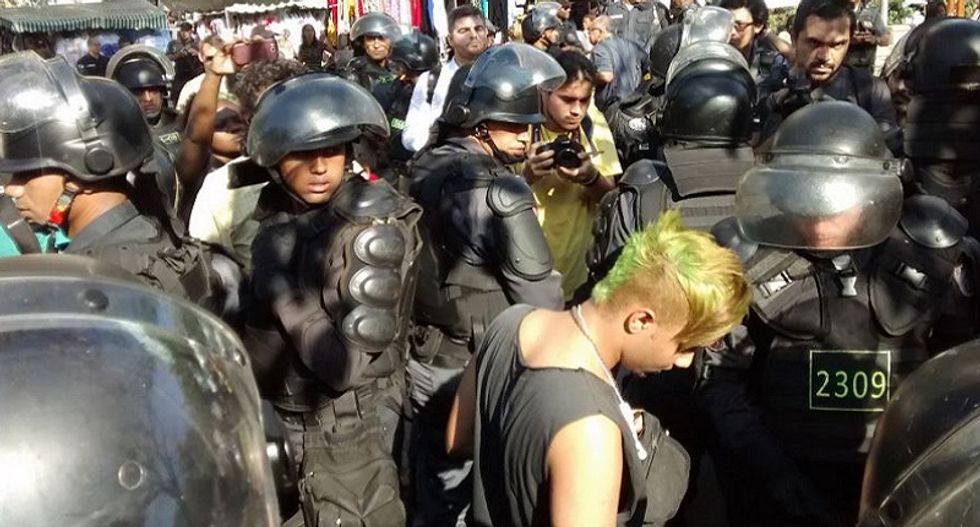 Thousands of Brazilians angry at political upheaval, corruption and the cost of the Rio Olympics blocked traffic in protests hours before the gala opening ceremony.

Most people came to vent anger at center-right interim president Michel Temer who took power in May on the suspension of the elected leftist president, Dilma Rousseff, for an impeachment trial that her supporters claim amounts to a coup.

The demonstrators, however, also targeted the Olympics, saying the billions of dollars spent on staging South America's first Games fueled corruption and only helped the elite.

Waving signs that read "No to the Olympics!" and "Temer out!", about 3,000 people blocked a major avenue outside the luxury Copacabana Palace Hotel where many Olympic team members are staying.

Guests with Olympic accreditation around their necks looked down from the hotel terrace at the protest, while the crowd jeered at vehicles taking Olympic VIPs and athletes through the upscale neighborhood.

When a limousine surrounded by police outriders came through, the crowd surged forward, chanting "no to the coup" and "putschists, fascists, we won't let them pass!"

The protest was the latest unwelcome distraction for Brazilian authorities and Olympic organizers ahead of the opening ceremony at the 78,600 capacity Maracana stadium.

Authorities are also dealing with rampant crime, including a lengthening list of muggings against Olympic delegates and journalists, despite the deployment of 85,000 soldiers and police to protect the Games.

Police at the Copacabana protest, which was to be followed by more demonstrations near the Maracana stadium, were restrained.

Even when the protesters blocked the busy Avenida Atlantica, causing a major traffic snarl-up, the dozens of officers held back. The tactic was in marked contrast to the tear gas and rubber bullets used several times in the last few days to clear protesters from the Olympic torch relay.

Protesters, many of them from Rousseff's leftist Workers' Party, said Brazil's deep economic and social problems are being swept under the carpet for the Olympics.

"They're holding the Olympics when people are having a very hard time," said Ricardo Parents 59, a psychologist.

"The Olympics is a facade, it's for show. It doesn't represent the reality of Brazil. They want to show everything nice and perfect."

Over and over again the crowd chanted "Temer out" and called for Rousseff's return.

She is charged with breaking budgetary laws and looks almost certain to be thrown out of office by the Senate in the next few weeks at the end of an impeachment process that she says has been manipulated by Brazil's right, calling Temer the chief "conspirator."

"I am demonstrating for democracy in Brazil. The world is watching so we are here to denounce the coup," said one demonstrator, Iraci Franca, 57, a nurse.

She also said that the Games were a distraction at a time of national economic crisis.

"It's very hard right now in Rio state for education and health because of the lack of funds and non-payment of salaries," she said.

Rio de Janeiro won the right in 2009 to host the Olympic Games at a time when Brazil was economically and politically on the rise. The collapse in stability and wealth since then has been brutal.

Temer is to open the Games at the Maracana stadium, while Rousseff and her predecessor and political mentor Luiz Inacio Lula da Silva have refused to attend the ceremony.

With opponents promising to boo Temer at the stadium, organizers plan to play loud music immediately after his remarks and mask the heckling, according to Brazilian media.

"We want to take advantage when the world's attention is on Brazil to denounce what's happening, how we are on the path to dictatorship," said one demonstrator, Ubiratan Delgado, a 59-year-old engineer.

"We're not against the Olympics, it's the criminal Olympics we oppose."