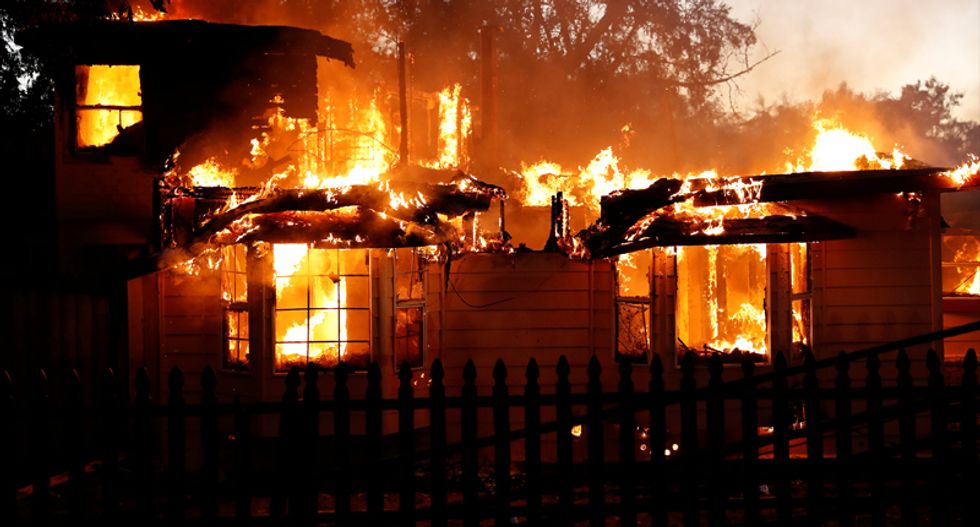 A burning house damaged by the Clayton Fire is seen near Lower Lake in California, U.S. August 14, 2016. REUTERS/Stephen Lam

A rampaging wildfire that descended on a small Northern California town over the weekend destroyed more than 100 homes and businesses, authorities said on Monday, as crews fought to save more dwellings from the flames.

The so-called Clayton fire, which broke out on Saturday evening, was driven by fierce winds into the foothill community of Lower Lake, some 80 miles (129 km) north of San Francisco, burning everything in its path and forcing hundreds of residents to flee.

A damage assessment team was working to determine how many structures were lost, said Daniel Berlant of the California Department of Forestry and Fire Protection. But he added, "we know it's well over 100," mostly homes.

There were no reports of casualties, Berlant said, but Lake County sheriffs deputies were investigating burned-out structures. The nearby community of Clear Lake was also evacuated.

As winds died down on Sunday evening crews began to make progress cutting containment lines around the flames and putting out hot spots, Berlant said, but "we know that as temperatures heat back up again today it's likely fire conditions will increase."

"We've got over 1,600 firefighters ready to go to battle again when that happens."

The cause of the blaze, which has so far blackened more than 3,000 acres, was under investigation. Fire managers said it was about 5 percent contained as of Monday morning.

The conflagration is one of 24 major wildfires burning across the drought-parched U.S. West which all together have charred nearly 300,000 acres.

The so-called Chimney fire, which erupted on Saturday afternoon in San Luis Obispo County, had scorched more than 4,300 acres in less than 48 hours, destroying 20 structures and threatening some 150 others as hundreds of residents were told to evacuate.

That blaze was only 10 percent contained as of Monday morning.

The Soberanes fire, one of the largest so far this season, has burned through more than 72,000 acres near scenic Big Sur, destroying 57 homes and 11 outbuildings since it broke out on July 22. It was 60 percent contained as of Monday.

A bulldozer operator died on July 26 when his tractor rolled over as he helped property owners battle the flames, the sixth wildfire fatality in California this year.

Authorities have traced origins of the Soberanes fire to an illegal campfire left unattended in a state park about a mile from Highway 1. No arrests have been made so far.