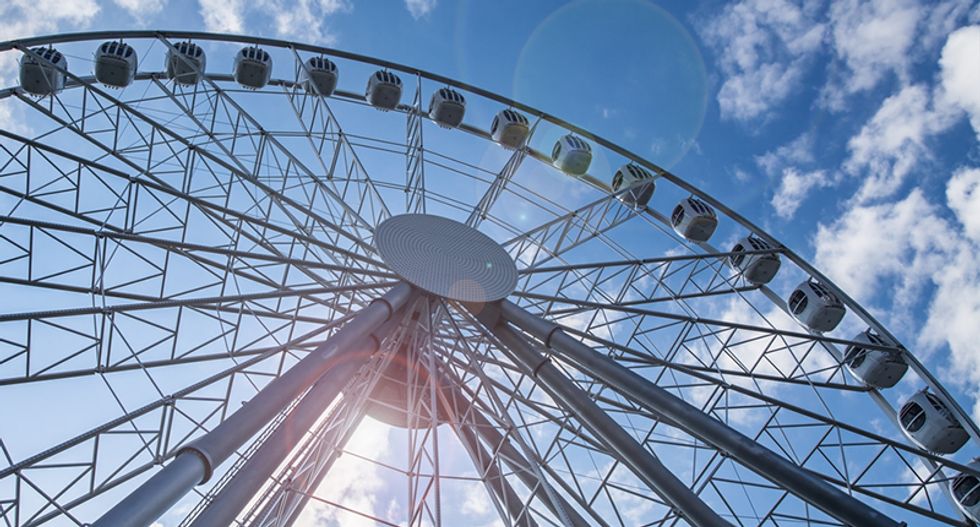 Three girls were injured during a Ferris wheel accident on Monday. Private inspectors who investigated the Ferris wheel believe the basket holding the girls plummeted to the ground after suffering some kind of mechanical failure, causing the gondola to flip.

The Associated Press reports the Georgia-based company, Family Attractions Amusement, which operated the ride, was also involved in another accident three years ago. During the North Carolina State Fair of 2013, five people were hurt after a ride called The Vortex started up again as people were getting off the ride. People were thrown into the air and knocked to the steel deck below. Investigators found that someone had disabled a safety mechanism that was there to prevent such an accident.

The company claimed they didn't own the ride at the North Carolina incident, but regulators found the company held the insurance for the ride, those that operated the ride were employed by the company and the company was listed as the owner for other fairs across the country.

The owner of Family Attractions Amusement's son Joshua Macaroni and ride operator Timothy Tutterrow have been charged with assault with a deadly weapon. Tutterrow has already pleaded guilty and agreed to testify against Macaroni, saying he meddled with the circuit panel for the ride and ultimately was the one who disabled the safety mechanisms.

Macaroni made a plea agreement for the North Carolina incident, where he refused to admit guilt but agreed he would serve time for the incident. The judge sentenced him in February to 15 months in prison but then suspended it to a month in jail and a fine of $22,500. If the judge hadn't suspended the sentence, Macaroni wouldn't have been in Tennessee.

While they currently hold a permit for the Ferris wheel in Tennessee for the next three months, a third-party investigator is being called in due to the incident. Only then will they qualify for a new permit.

WVLT reports the mother of the two girls hurt when their gondola turned over posted an update on Facebook Tuesday evening. She said that the girls, Kayla Reynolds, 10, is in a lot of pain with a severe arm break but is alert and playing on an iPad. The younger girl, Briley Reynolds, 6, has a concussion and small brain bleed. While en route to the hospital following the incident, the girl had seizures, though she has responded to voices of family members in the ICU.

In a post on Facebook Thursday morning the mother sent a note of thanks for the responses she's receiving from around the country. "The outpouring of support from the whole country has been amazing. You all will never know the difference you are making in our lives. If I could have it my way, this would be the way of the world," she wrote.