Sandusky asserts innocence at hearing on bid for new trial 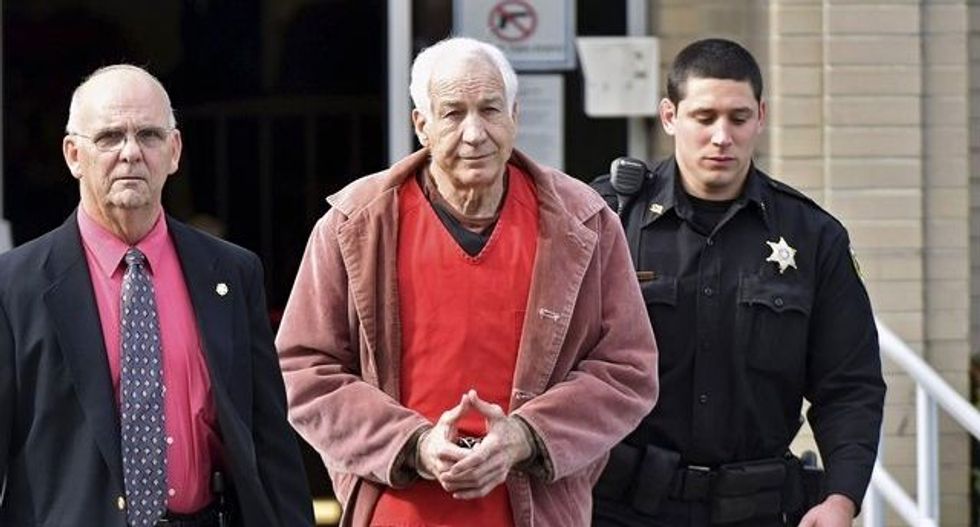 Jerry Sandusky, the former football coach convicted in 2012 of molesting 10 boys, took the stand for the first time in his own defense on Friday, forcefully denying he had abused anyone, as a hearing on his bid for a new trial in Pennsylvania got underway.

Sandusky, an assistant coach for three decades at Pennsylvania State University under legendary head coach Joe Paterno, testified at the hearing to determine whether his original trial lawyer, Joseph Amendola, failed to provide him with a competent defense.

The former coach contends that Amendola would not allow him to take the stand, a decision that Sandusky and his current lawyer, Alexander Lindsay, say was a crucial mistake.

"Mr. Amendola even stated in his opening remarks that I would be testifying. That's what I was prepared to do," Sandusky said on Friday.

When asked if he was guilty of the crimes for which he was convicted, he again answered: "Absolutely not."

Before his animated testimony, Sandusky entered at the Center County Court of Common Pleas in Bellefonte, Pennsylvania, in shackles and an orange prison jump suit, and flashed a toothy grin as his wife Dottie looked on from the gallery.

Sandusky is serving 30 to 60 years in protective custody in the state’s Greene “supermax”` prison in Franklin Township after his conviction in a case that rocked the insular world of big-time collegiate sports.

The accusations against Sandusky raised questions about whether some Penn State officials, including the now-deceased Paterno, looked the other way for years and failed to alert authorities about Sandusky's behavior.

Judge John Cleland, who has presided in the Sandusky case from the beginning, has allowed Lindsay to pursue 10 claims regarding Amendola, including a decision to allow sportscaster Bob Costa to interview Sandusky for a television program that gave fresh evidence to prosecutors.

Deputy Attorney General Jennifer Peterson, who represented the state, asked Sandusky why he did not challenge his lawyer more forcefully.

“I was a novice and I assumed Mr. Amendola was the expert on this,” Sandusky said.

The former coach’s bitterness toward his adopted son Matt, who revealed at the time of the trial that he also had been molested by Sandusky, also poured out at the hearing.

Amendola decided against allowing the former coach to take the stand in his own defense when Matt Sandusky made his disclosure, a decision that Jerry Sandusky and Lindsay now contend was ill-advised.

Sandusky, who referred to Matt as “my former son,” also sought to discredit his adopted son by pointing to Matt's supportive behavior before the trial.

“He begged to have his children visit me," Sandusky said. "He moved back into our house in his 30s.”

Under state law, Sandusky and Lindsay must not merely prove that Amendola made mistakes, but that the mistakes made it impossible for him to get a fair trial. Cleland will rule at a later date on whether the former coach will get a new trial.