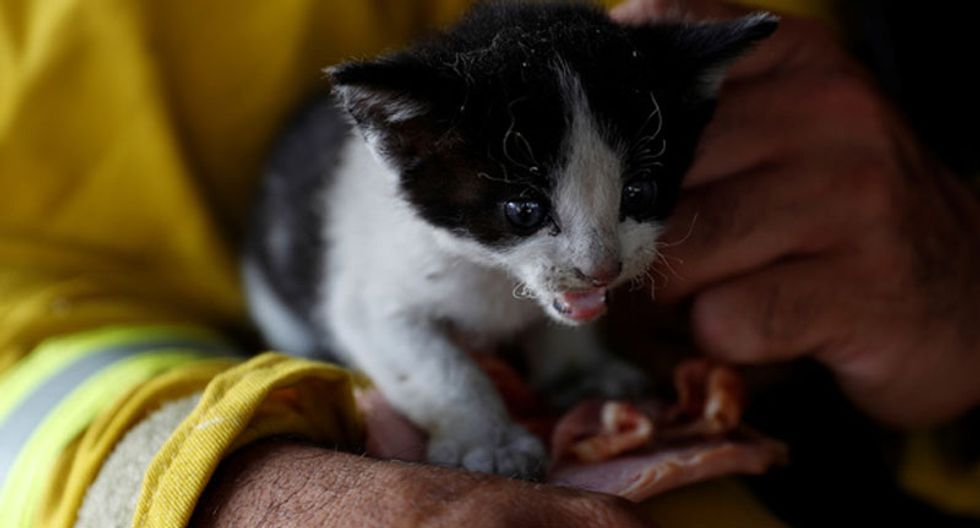 Hundreds of firefighters were battling a rapidly-spreading wildfire raging unchecked in drought-stricken Southern California on Wednesday after flames forced more than 80,000 residents to flee.

The Bluecut Fire, which erupted on Tuesday morning and has grown to cover some 18,000 acres (7,300 hectares) of heavy brush in an area called the Cajon Pass, was zero percent contained as of Tuesday night, fire officials said.

Authorities issued evacuation orders for 82,640 residents and some 34,500 homes near Interstate 15, the main freeway between Las Vegas and the Los Angeles area, a stretch of which was closed indefinitely.

Two firefighters were trapped by flames in the effort to evacuate residents and defend homes, but managed to escape with only minor injuries, fire officials said. The cause of the blaze is still under investigation.

More than 600 miles (970 km) to the northwest, crews made headway against a Northern California wildfire that has destroyed more than 175 homes and businesses.

The so-called Clayton Fire was 35 percent contained on Tuesday night, according to the California Department of Forestry and Fire Protection (Cal Fire). It has charred 4,000 acres (1,620 hectares) in and around the community of Lower Lake since Saturday evening, forcing hundreds to flee.

Damin Pashilk, a 40-year-old arrested on suspicion of setting that blaze, and several others in the area over the past year, is set to appear in court on Wednesday.

The Clayton fire threatened about 1,500 structures at its peak. As of Tuesday evening, only 380 buildings were in danger, according to Cal Fire. There were no reports of casualties.

California Governor Jerry Brown on Tuesday declared a state of emergency in San Bernardino County for the Bluecut Fire, which allows state agencies to come to the assistance of local officials. He had issued emergency declarations on Monday for the Clayton Fire and another in Central California, the Chimney Fire.