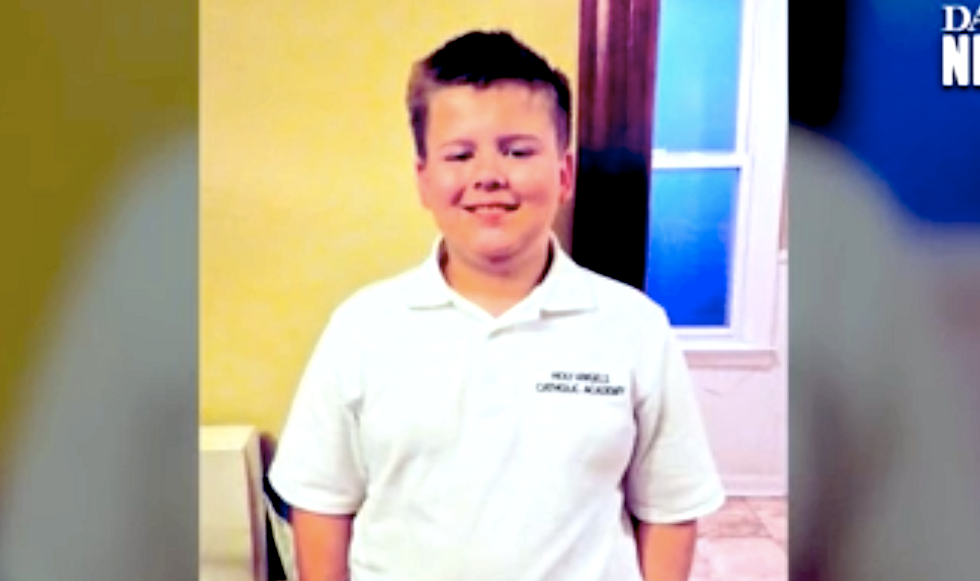 Thirteen-year-old Daniel Fitzpatrick, who killed himself Thursday after school officials refused to stop the bullies who constantly tormented him (Screen capture)

A 13-year-old boy in Staten Island, NY committed suicide this week after school officials did nothing to stop the incessant bullying he was subject to every day.

The New York Daily News said that Daniel Fitzpatrick left behind a heartbreaking letter in which he said he "gave up" on life and getting help after classmates at Holy Angels Catholic Academy in Bay Ridge, Brooklyn ruthlessly bullied him about his weight, grades and social awkwardness.

Fitzpatrick's family said that their son tried to get help from teacher after teacher, but they -- and the school principal -- turned a blind eye and allowed other students to torment the boy.

“I gave up,” he wrote in a suicide note. “The teachers...they didn’t do anything."

Daniel was found by his sister on Thursday night, hanged by the neck in the family's attic.

The family shared the letter with the Daily News on Friday in hopes that someone will be "held accountable" for their son's death.

“My son shouldn’t have to die to be heard,” said Daniel's mother Maureen Fitzpatrick. “There’s something wrong with the adults in authority positions when kids can’t go to them for help.”

"No parent is supposed to bury their child," she said.

Daniel was due to start high school in the fall, but Holy Angels recommended that he repeat the 7th grade at another school because his grades were so low. For Daniel to be a grade behind while at Holy Angels, school officials suggested, might "damage his psyche."

The boy's father, also named Daniel Fitzpatrick, scoffed at the school's high-handedness, saying that it was his classmates' bullying that caused his son's grades to slip.

“His grades went from passing to the low 40s and 60s,” said Mr. Fitzpatrick to the Daily News. “His confidence was completely shattered.”

In his suicide letter, Daniel identified five boys who were his constant tormenters.

“They did it constantly,” he wrote.

One teacher belittled Daniel in front of his classmates, calling him "lazy" and showing his failing exam papers in class for other students to see. His sister Kristen Fitzpatrick, who also attends Holy Angels, said that particular teacher is known for his sadistic attitude toward students he doesn't feel measure up.

“If one person didn’t like you, no one liked you,” said Kristen. “Danny was always left out. He used to come up to me and ask me to get kids to play with him. The other kids would say they thought he was weird.”

The school sent social workers to the Fitzpatrick home. Both parents voluntarily submitted to testing for drug and alcohol abuse and passed.

The Fitzpatrick family allege that Holy Angels staff forced Daniel out of the school.

“Danny said that he was afraid of his teachers,” said his mother. “He felt like the whole school knew what was going on and was laughing behind his back. They humiliated him.”