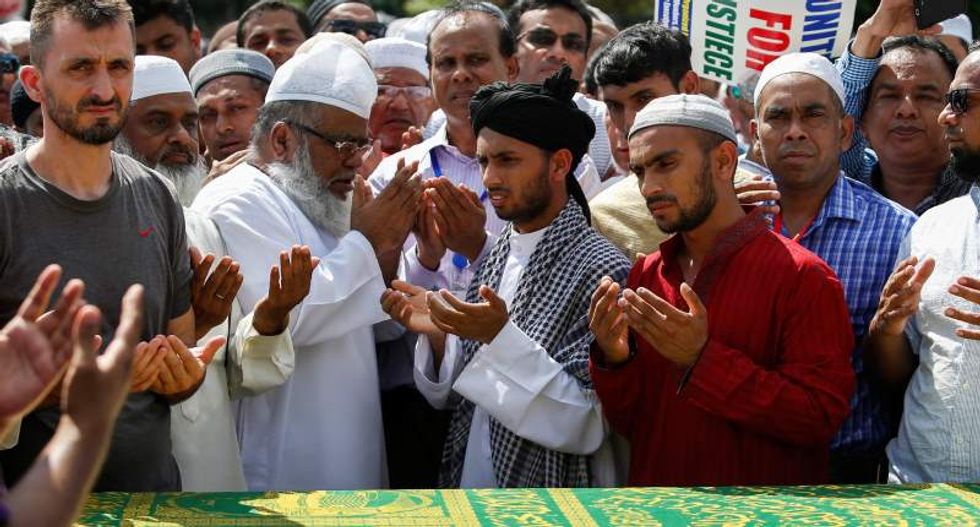 Hundreds of mourners gathered in New York City on Monday for the outdoor funeral for a Muslim cleric and his associate who were gunned down over the weekend, as police questioned a man about the killings that shocked the neighborhood's Bangladeshi community.

The traditional Islamic services for Imam Maulama Akonjee, 55, and Thara Uddin, 64, drew a large crowd to a parking area near where the men were killed after Saturday prayers at the Al-Furqan Jame Mosque in the Ozone Park section of Queens.

The suspect being questioned was arrested on charges related to a hit-and-run traffic accident on the day of the murders, police said at a briefing.

He was described as a 36-year-old Hispanic man from the borough of Brooklyn, but they declined to give his name.

A motive for the killings has not been determined, police said, adding that there was still no known connection between the man being questioned and the murder victims.

"We believe because of the evidence we have acquired thus far that ... this is the individual," New York City Chief of Detectives Robert Boyce said when asked if he could reassure the rattled community.

Speaker after speaker at the funeral had implored authorities to investigate the murders as hate crimes and to step up efforts to protect mosques and parts of the city like Ozone Park where many Muslims live and work.

"We want justice," Badrul Kahn, founder of the Al-Furqan mosque and its chief adviser, shouted to the crowd in the service's opening speech. "We want justice," responded the mourners, most of them men dressed in Islamic garb.

Mayor Bill de Blasio, addressing the funeral, promised the city would bolster the police presence in the neighborhood even though the motive behind the killings was still unclear.

"We don't know what happened but we will," the mayor said. "An attack on one of us is an attack on all of us."

Police had said earlier that there was no evidence the men were targeted because of their faith but nothing was being ruled out.

The victims appeared to have been stalked by a lone gunman who shot them in the head at close range at about 1:50 p.m. (1750 GMT) on Saturday, police said after interviewing witnesses and watching surveillance video.

Residents of Ozone Park were shaken by the brazen daylight killings and said such a crime was rare in the quiet neighborhood.

Felix Lopez, 26, who has lived in Ozone Park for a decade and works at a barber shop, said the Muslims in the neighborhood, many of Bangladeshi heritage, were very friendly and there was little rancor between ethnic groups in the area.