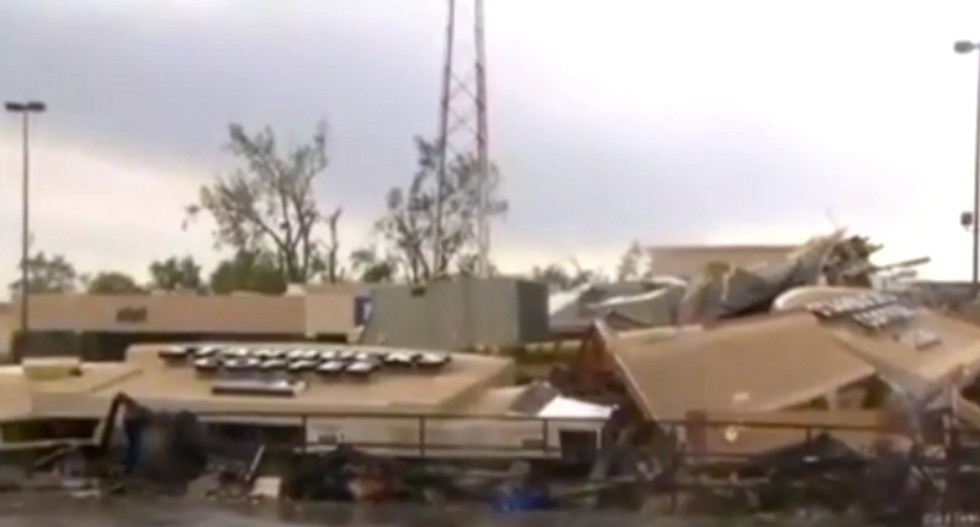 Several tornadoes plowed through central Indiana on Wednesday, demolishing numerous homes and a Starbucks cafe in the town of Kokomo and cutting off power to thousands of Indianapolis-area residents, but no serious injuries were reported.

Governor and Republican vice presidential nominee Mike Pence, who cut short a campaign trip for running mate Donald Trump and returned to Indiana, said eight funnel clouds were confirmed and three touched down during a "very tough day of weather."

Tornado warnings were issued in 27 counties, but no one was known to have been killed or badly hurt, Pence said, adding that he would remain in Indiana for "as long as we need to be here."

Ten to 12 people were reported to have suffered minor injuries in Howard County, which apparently bore the brunt of the storms, according to John Erickson, spokesman for the state Homeland Security Department.

At least one "large and extremely dangerous" tornado struck near Indianapolis, the state's capital and largest city, as severe thunderstorms rolled through the region in the late afternoon, the National Weather Service said.

But Kokomo, a city of 45,000 people about 60 miles (100 km) north of Indianapolis, appeared to be the epicenter of storm damage, including a flattened Starbucks outlet and numerous houses left splintered or with roofs and walls torn away.

The entire front wall and facade of the Starbucks could be seen abruptly collapsing in the wind in cellphone video footage shot from a bar across the street and aired by Indianapolis-based NBC News affiliate WTHR-TV.

Starbucks customers and employees "piled into" the restroom to shield themselves as the storm closed in, according to a police account related to Reuters by City Councilman Bob Cameron.

"They all got in there. That was a smart move," he said, adding that shoppers at a nearby Krogers supermarket likewise waited out the storms in coolers at the back of the store.

An adjacent shopping mall was reported to have been heavily damaged, and Erickson said a nursing home in Howard County also sustained storm damage.

Aerial footage of Kokomo broadcast by WTHR showed a five-block residential area where at least 10 homes were largely obliterated and several others heavily damaged.

Power outages were reported across the state, with about 42,000 homes and businesses without electricity at the height of the storms, including 24,000 outages in Howard County alone, Erickson said.

Howard County issued a state of emergency to remain in effect until 9 p.m. Thursday.