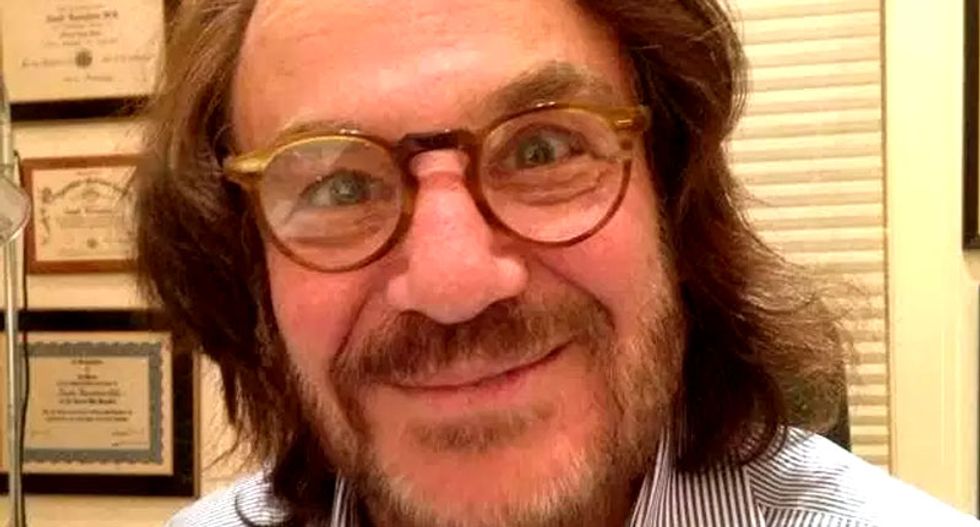 The gastroenterologist who wrote Republican presidential candidate Donald Trump's certificate of health has been sued at least three times since 1992 by families of deceased patients who say he prescribed their loved ones outrageously high doses of dangerous medications.

According to the Daily Beast, Dr. Harold Bornstein's free hand with powerful addictive drugs has led to multiple malpractice suits when patients died. At least two of those cases were settled out of court.

"In 2002, he paid $86,250 to the husband of a former patient to settle a lawsuit alleging that Bornstein overmedicated his wife with powerful, unneeded prescriptions, which contributed to her addiction -- and ultimately her death," wrote the Beast's Brandy Zadrozny.

A complaint against Bornstein lodged by widower -- and former patient -- Kenneth Levin said that the doctor was "negligent, careless, and unskilled in failing to properly diagnose the plaintiff.”

Furthermore, Levin's complaint alleged that in treating his late wife Janet Levin, Bornstein was negligent “in failing to make a referral to a mental health professional; in wrongfully prescribing tuinal, morphine, and valium, particularly in light of the history of drinking; in improperly and negligently seeing the patient without providing treatment; and in overmedicating the decedent.”

In 1994, then 49-year-old Janet Levin reportedly began having multiple doctor's visits with Bornstein every week. During those sessions, Bornstein provided no medical treatment except to administer the sedative medications tuinal and valium "greatly in excess of appropriate dosages.”

Kenneth Levin has since passed away, but a relative told the Beast that Bornstein "prescribed for [Janet] medication disproportionate for her physical weight and she ended up falling and dying. I’m not saying it is because of him, but he contributed to her death. This is now 18 years ago.”

Levin's lawsuit said that in spite of the fact that Janet Levin appeared to be receiving no medical benefit from the drugs, Bornstein continued to administer them "despite full knowledge that these prescriptions were not for the treatment of any known condition and in amounts that were well above therapeutic levels.”

State records show that Bornstein has been sued for malpractice at least three times. In 2000, the New York Daily News reported, Bornstein was sued by Lorraine Pollifrone, who said the doctor improperly medicated her husband, leading to his death during a routine colonoscopy. That case was also settled out of court for an undisclosed amount.

Questions have swirled about Bornstein's professionalism and practices since Donald Trump released his certification of health earlier this year. The document reads as if Trump wrote it himself and Bornstein simply signed his name at the bottom.

The physician claims he wrote the note in five minutes while Trump's limousine waited outside, which would normally be unheard-of in itself, but Democratic nominee Hillary Clinton's campaign questions the veracity of even that claim.

"Donald Trump is healthy as a horse," said a message on Clinton's website, "just ask his personal physician, who sounds remarkably like Donald Trump."

"The manner in which Dr. Bornstein describes Donald Trump’s tests is positively alarming," the site said. “'Positive' test results might sound good but, as all doctors (and patients!) should know, they indicate that you have the condition you were tested for."

It went on, "Dr. Bornstein describes Trump’s lab test results as 'astonishingly excellent,' which isn’t a real medical description. And while we’re at it: Why would a doctor ever be astonished by good test results?"

Newsweek journalist Kurt Eichenwald savaged the Bornstein letter, saying, "I will say flat out that this is not a real letter...it’s not from an internist, it’s from a doctor who treats digestive problems.”

“It says Donald Trump will be the healthiest president in the history of the United States,” Eichenwald said. “That sounds a lot like Donald Trump. It doesn’t have a real letterhead. The letterhead was written on Microsoft Word.”