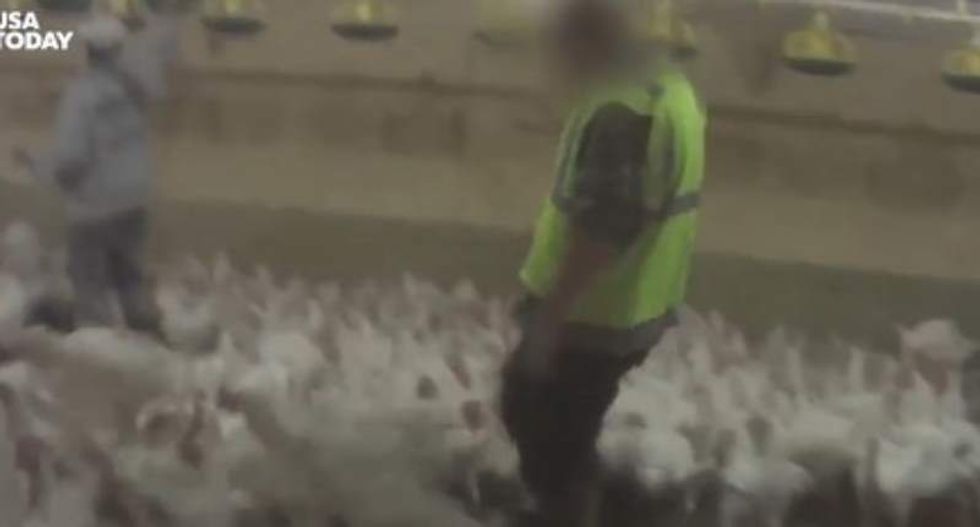 Tyson Foods Inc said it has fired 10 workers who were captured abusing breeder chickens in Virginia in a secretly recorded video released by an animal rights group on Thursday.

The company also said it will retrain workers who handle live poultry on animal welfare policies after the latest instances of abuse came to light.

The video by the activist group Compassion Over Killing showed Tyson workers at several facilities punching, kicking and flinging live birds. One employee was shown crushing the head of a live chicken under his boot.

The footage, recorded in May and June, was posted on the website of the activist group, which fights for animal rights and encourages vegetarianism.

Springdale, Arkansas-based Tyson, one of the world's largest meat processors, said it was "disgusted by the actions of the individuals in the video."

Tyson said it believed it had not gone far enough to stop the mistreatment of animals at its facilities and was evaluating other steps to ensure its policies were being followed.

The video marks at least the fifth time since 2015 that animal activists have secretly filmed abuse at Tyson farms.

"Animal cruelty is not the product of a few bad actors. It's a systemic issue that the company needs to address," the executive director of Compassion Over Killing, Erica Meier, said in an interview.

Tyson and Compassion Over Killing said separately they had contacted law enforcement who will determine whether to pursue criminal charges against the workers.

"Tyson should be held accountable for the horrors inflicted upon these animals," Meier said in a statement.

Tyson also said it has stopped a practice shown in the video that involves pushing a piece of plastic through the beaks of live male chickens.

The practice, known as boning or beak modification, was "a historical way the industry has used to keep males from eating food intended for females," according to Tyson. The company said it immediately stopped boning at the final two locations where it was performed, after previously eliminating it at other facilities.

On Monday, Tyson reported record operating margins in its chicken segment in the quarter ended on July 2. The unit had sales of $11.4 billion in 2015.

Footage of the abuse, as published by USA Today, can be seen below. NOTE: The video is graphic.