US will meet goal of admitting 10,000 Syrian refugees by October: White House 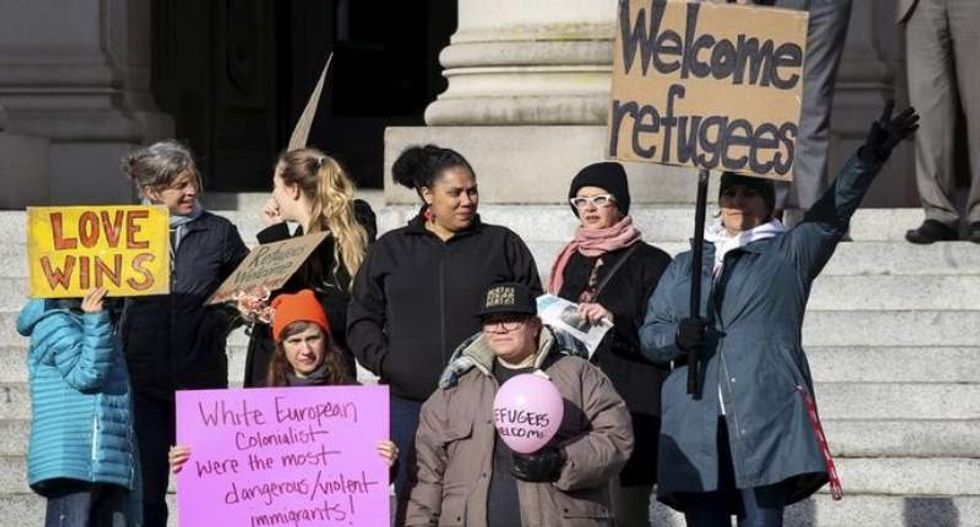 Pro-refugee counter-protesters gather during another group's protest against the United States' acceptance of Syrian refugees at the Washington State capitol in Olympia, Washington, on Nov. 20, 2015. (Reuters/David Ryder)

The Obama administration will meet its goal of admitting 10,000 Syrian refugees this fiscal year a month ahead of schedule and is working with Congress to increase the target by a few thousand in 2017, the White House said on Monday.

The 10,000th Syrian refugee was scheduled to arrive in the United States on Monday afternoon, national security advisor Susan Rice said in a statement.

The White House had pledged to admit at least 10,000 displaced Syrians during the current fiscal year, which wraps up at the end of September.

"While refugee admissions are only a small part of our broader humanitarian efforts in Syria and the region, the president understood the important message this decision would send, not just to the Syrian people but to the broader international community," Rice said.

U.S. admission of Syrian refugees has been a hot button issue in the 2016 race for the White House, with Republican presidential candidate Donald Trump warning that violent militants could enter the country posing as refugees.

Trump has said that if he is elected he would persuade Gulf states to bankroll safe zones for Syrian refugees so they would not have to be brought to the United States.

In addition, some Democrats in Congress have pressed to toughen the screening process for Syrian refugees.

The civil war in Syria has led to a flood of millions of refugees from Syria. But so far, the United States has offered refuge to far fewer than many of its allies have. Germany has taken in hundreds of thousands and Canada admitted nearly 30,000 between November last year and May 1.

White House spokesman Josh Earnest told reporters the administration plans to increase the number by a few thousand in fiscal 2017. Secretary of State John Kerry will hold talks with lawmakers in Congress before the administration sets the figure for that year. Obama leaves office on Jan. 20, 2017.

"I anticipate in the next few weeks we will have some additional news on this," Earnest told reporters. Obama would like to see a "ramping up of those efforts" but is realistic about how quickly that could happen, he said.

(This version of the story has been refiled to state that White House corrects year referenced in first paragraph, and in penultimate paragraph, makes clear it plans to increase number of refugees by a few thousand in 2017)