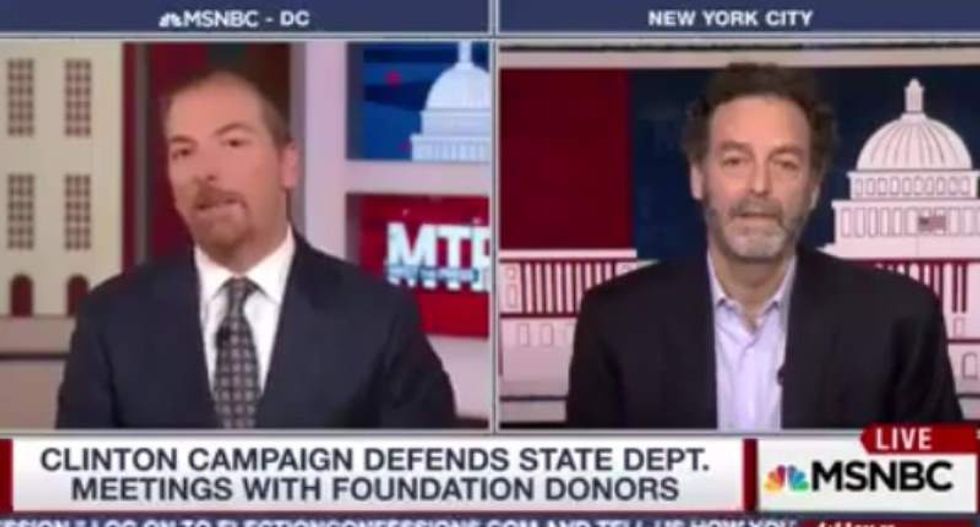 "Nobody, Democrat or Republican, raised a question about Neal Bush, the second President Bush's brother, remaining on the board of the Points of Light foundation because these foundations are charitable organizations that are helping people who aren't getting help from other places. What is going on here?" Joel Benenson asked Todd. "We are so politicized that we'll listen to fringe elements like Steve Bannon, and the stuff he's peddling to Donald Trump."

"Joel, it was Democrats -- people working for President Obama -- that were concerned of the optics," Todd countered. "As Dick Lugar said, it's not about the good intentions of President Clinton and Secretary Clinton. But the person giving the money may think it gives them something regardless, and that's a bad thing."

Lugar, a former GOP senator, has said that Clinton needs to make a "clean break" from the foundation if she wins the presidency. The Associated Press reported that the Clinton Foundation will no longer accept donations from foreign or corporate groups if she is elected president in November.

At one point in the interview, Benenson turned the question of transparency onto Trump.

"Let's talk about transparency and openness and go down the block from your studio in New York, where Donald Trump owns a building a short walk from where I'm sitting," he told Todd. "He's in debt from banks in China, from Goldman Sachs. That is a clear conflict. This man is running for president and he's saying he'll just give the buildings to his kids."